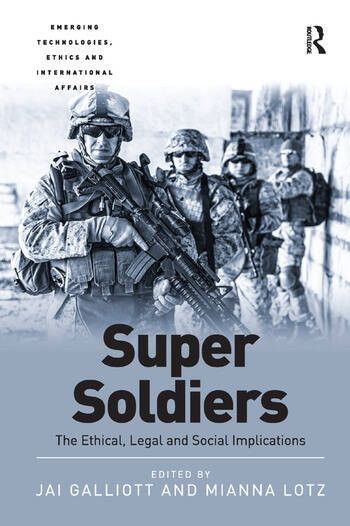 The Spartan City State produced what is probably one of the most iconic and ruthless military forces in recorded history. They believed that military training and education began at birth. Post-World War II saw a shift to army tanks, fighter jets and missiles that would go on to fight the next huge battle in Northern Europe. Today, with the advent of unmanned systems, our hopes are attached to the idea that we can fight our battles with soldiers pressing buttons in distant command centres. However, soldiers must now be highly trained, super strong and have the intelligence and mental capacity to handle the highly complex and dynamic military operating environment. It is only now as we progress into the twenty-first century that we are getting closer to realising the Spartan ideal and creating a soldier that can endure more than ever before. This book provides the first comprehensive and unifying analysis of the moral, legal and social questions concerning military human enhancement, with a view toward developing guidance and policy that may influence real-world decision making.

Jai Galliott is a Research Fellow at The University of New South Wales in Sydney, Australia. His work revolves around military strategy and the ethical, legal and social implications of emerging technologies. He recently authored Military Robots: Mapping the Moral Landscape and prior to entering academia, served briefly as an officer of the Royal Australian Navy. Mianna Lotz is a Senior Lecturer in the Department of Philosophy at Macquarie University, Sydney. Her areas of research specialisation are ethics and applied ethics, with a particular interest in ethical issues in emerging science and technology, including in the spheres of biotechnology, reproduction, and surgical innovation. She is also Chair of the Faculty of Arts Human Research Ethics Committee at Macquarie.

’Recent developments in human enhancement and weapon systems promise to provide war-fighters with vastly enlarged physical, sensory and psychological powers. This wide-ranging collection provides the first comprehensive analysis of the conceptual and practical challenges posed by the emergence of such super soldiers� to attributions of agency and responsibility, the regulation of war, and the ethics of the military profession.’ Andrew Alexandra, University of Melbourne, Australia ’Enhanced warfighters are already a reality and will come to greater prominence as medicine and technology advance. Galliott and Lotz are asking the right questions at the right time. This work will help prevent us from having to play catch up when it comes to addressing the ethical and social implications of these fast-moving developments.’ Shannon E. French, Case Western Reserve University, USA