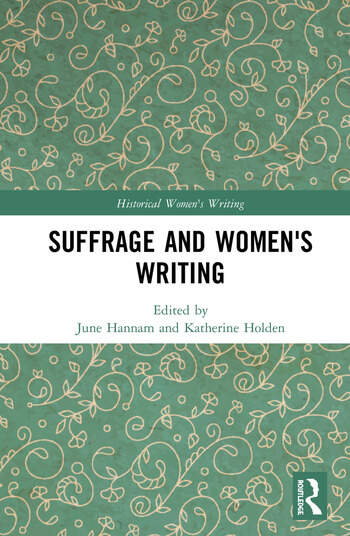 This volume examines different types of women’s creative writing in support of the demand for the parliamentary vote, including autobiographies, memoirs, letters, diaries, novels, and drama.

The women’s suffrage movement became far more visible in the Edwardian period. Large demonstrations and militant actions such as destruction of property were widely reported in the press and reached a wide audience. Eager to get their message across, suffrage campaigners not only took collective action but also used women’s creative talents—whether as artists, musicians, or writers—to win hearts and minds for the cause. Through a close reading of contemporary texts, the chapters in this book reveal the diverse nature of the suffrage movement and its ideas, and the complex relationship between the personal and the political. The contributors also highlight the significance of women’s writing as a means to advance the suffrage cause and as a key element of suffrage propaganda.

1. "My Part in a Changing World": Women’s Struggle for the Vote and the Autobiographical Subject

2. "Women Who Dared to Ask for a Vote": The Missing Memoirs of the Scottish Suffragettes

4. The "Sordid Story" of an Unwanted Child: Militancy, Motherhood and Abortion in Elizabeth Robins’ Votes for Women! and Way Stations

5. The Use of Irony as a Subversive Element in Suffrage Theatre

6. The American Suffrage Movement and the Novels of Marietta Holley and Elia Peattie as a Means of Cultural Lobbying

June Hannam is co-chair of the West of England and South Wales Women’s History Network and a Professor of History at the University of the West of England, UK. She edited the International Encyclopaedia of Women’s Suffrage (with Mitzi Auchterlonie and Katherine Holden, 2000). Her other publications include Socialist Women: Britain, 1880s to 1920s (with Karen Hunt, 2001) and Feminism (2007).

is co-chair of the West of England and South Wales Women’s History Network and was previously a Senior Lecturer at the University of the West of England, UK. She edited the International Encyclopaedia of Women’s Suffrage (with June Hannam and Mitzi Auchterlonie, 2000). Her other publications include The Shadow of Marriage: Singleness in England, 1914-60 (2007) and Nanny Knows Best: The History of the British Nanny (2013).