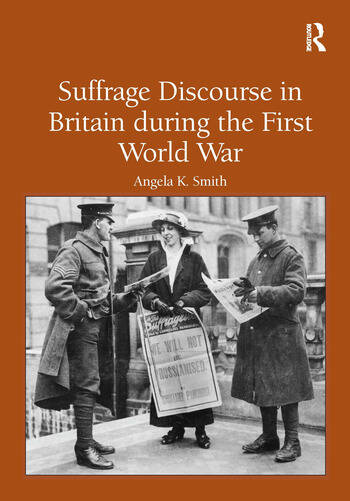 Suffrage Discourse in Britain during the First World War

In the first in-depth study of the relationship between the suffrage campaign in Britain and World War I, Angela K. Smith explores the links between these two defining moments of the early twentieth century. Did the opportunities afforded by the war enable women finally and irrefutably to demonstrate their right to full citizenship? Or did World War I actually postpone women's enfranchisement? Although the Suffrage Movement was divided by the outbreak of war, many women continued to campaign for the vote, producing a wide variety of fictional and nonfictional 'suffrage texts'. Whether the writing of these women demonstrated their patriotism, pacifism, or ambivalence, it formed an integral part of their political responses to the war. Through textual/literary analysis of Suffrage magazines, wartime diaries, and a range of topical novels, Smith explores these responses within historical, social, and cultural contexts to understand the impact of the war on the success of the campaign in 1918 and the consequences for the years that followed.

Contents: Writing suffrage before 1914; Patriotic suffragism: Emmeline and Christabel Pankhurst and the WSPU; A different view: Sylvia Pankhurst and the East End; The pacifist voice; Suffragists and war work; 'That silly suffrage': the paradox of the First World War; 'The empowering of individuals': feminism, art and war in The Egoist; Winning the peace; Bibliography; Index.

Angela K. Smith is Senior Lecturer in English at the University of Plymouth. She is the author of The Second Battlefield: Women, Modernism, and the First World War and editor of Women’s Writing of the First World War: An Anthology and Gender and Warfare in the Twentieth Century: Textual Representations. She is currently working on a biographical work on Mabel St. Clair Stobart.

'Angela Smith has produced a much-needed and deeply absorbing study which offers perceptive new insights on the language, literature, and history of the women's suffrage movement. This book was a pleasure to read.' Mary Joannou, Anglia Ruskin University, UK 'This is a well-argued book that sees many texts of both fiction and non-fiction, in a new light and demonstrates the resilience of print culture in times of national conflict... Suffrage Discourse in Britain during the First World War is a cogent and interesting contribution, not only to the study of suffrage and Great War literature specifically, but to book and women's history generally.' Sharp News

Suffrage Discourse in Britain during the First World War