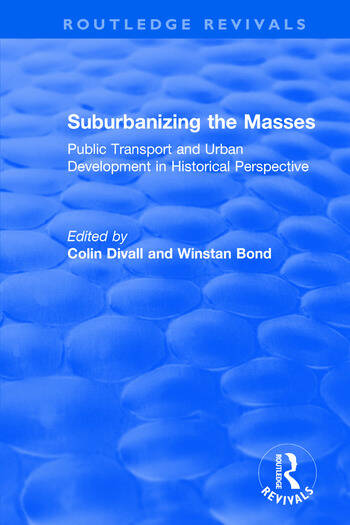 This title was first published in 2003. Suburbanizing the Masses examines how collective forms of transport have contributed to the spatial and social evolution of towns and cities in various countries since the mid nineteenth century. Divided into two sections, the volume develops first the classic tradition on transport and the city, public transport's 'impact' on urban development. The contextualisation of transport is one important factor in the historical debates surrounding urban development. As well as analysing the discourse employed by urban political and business elites in favour of public transport, these contributions show the degree to which practice often fell short of ideals. The second section tackles the professional paradigms of urban transport: the circulation of traffic in cities and the technological modes appropriate to its realization. In particular these contributions explore the paradigms held by professional planners and managers, and the political classes associated with them. From a variety of perspectives Suburbanizing the Masses demonstrates the continuing relevance of socio-historical inquiry on the relationship between public transport and urban development. By differentiating between the many roles of urban transport in the nineteenth century, it confirms that public transport was not directly linked to urban growth, and instead often had only a limited effect on the wider urban structure. Suburbanizing the Masses forces a reassessment of the received historiography that maintains cheap public transport was essential to the spectacular growth of cites in the nineteenth century.

'This is a magnificient book and a source for the development of many channels of further research, as well as being a lesson in the sources to which the various writers have turned.' Road & Road Transport '... well illustrated and wide-ranging...' The Journal of Transport History '... a useful cross-cultural treatment of an important topic. The volume is relevant not only to urban history but to policy analysis, urban planning, and urban geography and sociology.' Technology and Culture