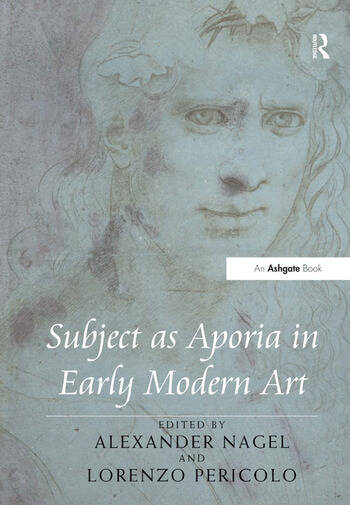 The studies in this volume focus on works of art that generate bafflement, and that make that difficulty of reading part of their rhetorical structure. These are works whose subjects are not easily identifiable or can be readily associated with more than one subject at the same time; works that take a subject into a new genre or format (pagan into Christian, for example, or vice versa), and thus destabilize the subject itself; works that concentrate on the marginal rather than the central episode; and works that introduce elements of the preparatory phase-the indeterminacy that are native to the sketch or drawing, for example-into the realm of finished works. Unable to settle on a single reading, the effort of interpretation doubles back on its own procedures. This aporia, according to Aristotle, serves as the initial impulse to philosophical inquiry. Although the works studied here are in many ways exceptional, the aporias they raise register larger structural problems belonging to the artistic culture as a whole. Between 1400 and 1700, we see the emergence of new formats, new genres, new subjects, and new techniques, as well as new venues for the display of art. It is an implicit thesis of this book that the systemic shifts occurring in the early modern period made the emergence of aporetic works of art, and of aporia as a problem for art, a structural inevitability.

Contents: Preface; Unresolved images: an introduction to aporia as an analytical category in the interpretation of early modern art, Alexander Nagel and Lorenzo Pericolo; Structural indeterminacy in early16th-century Italian painting, Alexander Nagel; Body, mind and soul: on the so-called Platonic Youth at the Bargello, Florence, Jeanette Kohl; Whittling down the Istoria, Patricia A. Emison; Between artistry and documentation: a passage to India and the problem of representing new global encounters, Ashley D. West; Naturalism and the Venetian 'poesia': grafting, metaphor, and embodiment in Giorgione, Titian, and the Campagnolas, Stephen J. Campbell; Bildraum as aporia, Christopher P. Heuer; Michelangelo, architecture and the stingray, Cammy Brothers; 'I will repair my work that was left ...': VelÃ¡zquez and the unfinished story of Arachne, Aneta Georgievska-Shine; Nude in motion: Rembrandt's Danae and the indeterminacy of the subject, Lorenzo Pericolo; Bibliography; Index.

Lorenzo Pericolo is Associate Professor, Department of the History of Art, University of Warwick, UK.

'A remarkable theoretical introduction by Pericolo and Nagel introduces this anthology of exciting new approaches to understanding the art of the early modern period. The concept of aporia, or the blockage of meaning, allows these authors to destabilize conventional methods of interpretation by paying careful attention to the structure of the work of art and our phenomenological response to it. If iconography once offered art history the promise of ascribing explicit meaning to works of art, it also served to fix their significance and to render them static entities within a historical framework. Aporia proves to be a concept by which works can be freed from the assumed necessity of affording the viewer univocal meaning, thus enabling scholars to pay greater attention to the "work" of the work of art in the present.' Keith Moxey, Barnard College and Columbia University, USA

’...this book throws out many intriguing ideas for the receptive reader...Recommended.’ Choice