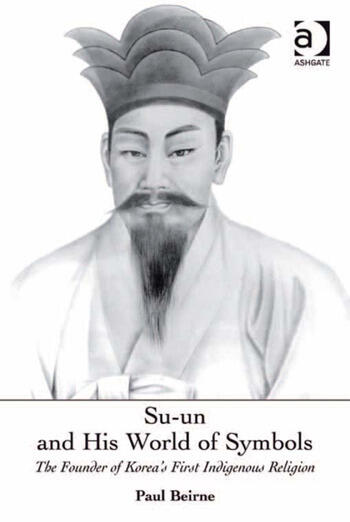 Su-un and His World of Symbols: The Founder of Korea's First Indigenous Religion

Su-un and His World of Symbols explores the image which Choe Che-u (Su-un), the founder of Donghak (Eastern Learning) Korea's first indigenous religion, had of himself as a religious leader and human being. Su-un gave his life so that he could share his symbols, his scriptures and the foundational principals of his religion with all people, regardless of their status, gender, age or education. His egalitarian creed challenged the major religious traditions in Korea, and Korean society as a whole, to reflect on the innate dignity of each individual, and to reform their social, ethical and religious practices to accord with the reality of the Divine presence in the 'sacred refuge' that lies within. Exploring the two symbols which Su-un created and used to disseminate his religion, and the two books of Scripture which he composed, this book breaks new ground by presenting the only major work in English which attempts to ascertain the image Su-un had of himself as the prototype of a new kind of religious leader in Korea, and by extension, East Asia.

Paul Beirne is Dean and Professor of Comparative Religion at the Melbourne College of Divinity. He lived and studied in South Korea for fifteen years, and has undertaken research on the Donghak/Cheondo-gyo religion since 1991. He has visited many of the religion's sacred sites (to which he had unrestricted entry). His contacts within the Cheondo-gyo organization made available to him a wide range of historical resources and rare archival material which provided vital insight into the mind and the heart of Su-un and his religious odyssey.

Paul Beirne's book is not only engagingly informative; it is flat-out inspirational. His study of Ch'oe Su-un, the founder of Korea's first indigenous religion, shows the vital links between mysticism and liberation, between religion and revolution. This is a book that will interest not just historians but comparative theologians, liberationists, students of mysticism. Paul F. Knitter, Paul Tillich Professor of Theology, World Religions, and Culture, Union Theological Seminary, New York With this study of the founder of Korea’s first indigenous organized religion, Paul Beirne has opened a new window onto Korea’s recent past. Most previous scholarship has focused on the dramatic political and economic transformation Korea has undergone over the last couple of centuries. Beirne reminds us that Korea has gone through equally dramatic changes in its religious culture, as Koreans have responded to the challenges of the modern world by creating new spiritual resources to help them navigate this transformed political and economic environment. Though Beirne focuses on Choe Su-un, a mid-19th century religious visionary, Choe’s ideas continue to reverberate in Korea today. This fascinating book helps us better understand the beliefs and values of modern Koreans. Don Baker, Professor, Department of Asian Studies, University of British Columbia ’Paul Beirne’s book is a valuable, compelling, and informative work that sheds much light on the foundation of one of the most influential religious movements in Korea in the nineteenth and twentieth centuries. It brings out well the context in which Tonghak was founded, the ideas and practices which influenced its founder, and most importantly, the interaction of thought, practice, and the process of theological development even within a few years of the formation of a new religion. It is a welcome and important contribution to studies on Tonghak and the history of Korean religion.’ Acta Koreana 'Beirne’s book is

Su-un and His World of Symbols: The Founder of Korea's First Indigenous Religion