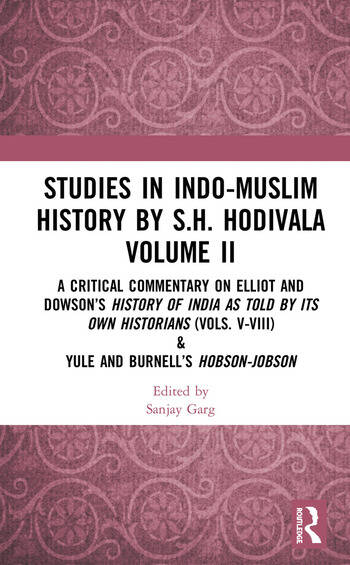 Studies in Indo-Muslim History by S.H. Hodivala Volume II: A Critical Commentary on Elliot and Dowson’s History of India as Told by Its Own Historians (Vols. V-VIII) & Yule and Burnell’s Hobson-Jobson

In the field of medieval Indian historiography, an eight-volume magnum opus, History of India as Told by Its Own Historians, by Sir Henry Myers Elliot (1808-53) and the editor-compiler of his posthumous papers, John Dowson (1820-81), was published from London between 1867 and 1877. These landmark volumes continue to retain their popularity even nearly hundred and fifty years later, and scholars still learn from and conduct their research on the basis of this work. However, an enterprise of this scale and magnitude was bound to suffer from some serious shortcomings.

An eminent Indian scholar, S.H. Hodivala undertook the daunting task of annotating Elliot and Dowson’s volumes and worked through all the new material, selecting or criticizing and adding his own suggestions where previous comments did not exist or appeared unsuitable. The first volume of Hodivala’s annotated Studies, was published in 1939, while the second was published posthumously in 1957.

Over the years, while the work of Elliot and Dowson has seen many reprints, and is even available online now, Hodivala’s volumes have receded into obscurity. A new edition is presented here for the first time.

Hodivala also published critical commentaries on 238 of about 2000 entries included in another very famous work, Hobson-Jobson (London, 1886) by Sir Henry Yule (1820-89) and Arthur Coke Burnell (1840-82). These have also been included in the present edition.

These volumes are thus aimed at serving as an indispensable compendium of both, Elliot and Dowson’s, and for Yule and Burnell’s excellent contributions of colonial scholarship. At the same time these would also serve as a guide for comparative studies and critical appreciation of historical texts.

Please note: Taylor & Francis does not sell or distribute the Hardback in India, Pakistan, Nepal, Bhutan, Bangladesh and Sri Lanka

Shahpurshah Hormasji Dinshahji Hodivala (1867-1944), is an iconic figure in the fields of medieval Indian numismatics and historical studies. He made unequalled contribution to the study of Mughal numismatics and his seminal work, Historical Studies in Mughal Numismatics (Calcutta, 1923) has been serving as a beacon of light to the students of Mughal numismatics for close to a century now. He had the honour of becoming the first Indian President of the Numismatic Society of India (Delhi Session, 1922). Besides, he is also well known for his Studies in Parsi History.
Sanjay Garg (b. 1965) is a numismatist and economic historian of international repute. He has extensive research experience in history of South Asia, with specialization in economic and monetary history, currency and coinage, historical architecture, and archival studies. His research findings have been widely published in print and multimedia, and include an edited volume of S.H. Holdivala’s numismatic contributions, Studies in Mughal Mint-Towns & Other Essays (2014).
At present Dr. Garg is posted as the Director, Swami Vivekananda Cultural Centre, Astana (Kazakhstan).

Studies in Indo-Muslim History by S.H. Hodivala Volume II: A Critical Commentary on Elliot and Dowson’s History of India as Told by Its Own Historians (Vols. V-VIII) & Yule and Burnell’s Hobson-Jobson