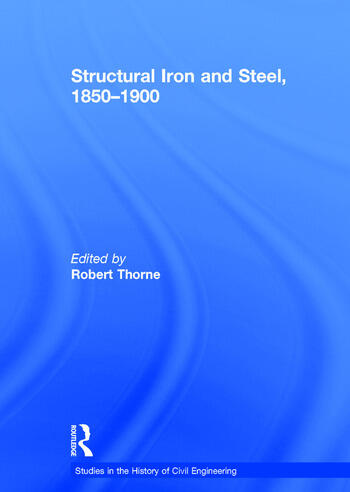 This volume covers the second great period of developments in iron construction from 1850, following its establishment as a structural material described in volume 9 of this series. Using the Crystal Palace of 1851 as a starting-point, the papers trace the history of iron-frame construction in Britain, France and America, and show its importance in fireproof construction, and in lattice truss and arch bridge design. A final group of papers illustrates the emergence of steel in framed buildings in both Britain and America. The selection brings out the important and daring contribution of individual engineers in their use of this material.

Contents: Introduction; Part I: Iron Construction - Crystal Palace and After: Some structural problems encountered in the building of the Crystal Palace of 1851, Tom F. Peters; The Boat Store, Sheerness (1858-60) and its place in structural history, A.W. Skempton; Bogardus revisited, Part I: The iron fronts and Part II: The iron towers, Turpin C. Bannister; The development of fireproof construction in Great Britain and the United States in the 19th century, Sarah Wermiel; Part II: Bridges and Exhibition Buildings: The development and use of the tubular beam, 1830-60, Stanley Smith; Surviving cast- and wrought-iron bridges in America, Eric Deloney; The designing of the Eads bridge, John A. Kouwenhoven; Tay Rail Bridge centenary: some notes on its construction, 1882-87, J. S. Shipway; The Forth Railway Bridge centenary 1890-1990: some notes on its design, J. S. Shipway; L’Entreprise Eiffel, Bertrand Lemoine; The Galerie des Machines of the 1889 Paris world’s fair, John W. Stamper; Part III: The Advent of Steel-Framed Construction: The two centuries of technical evolution underlying the skyscraper, Carl W. Condit; Toward a better understanding of the evolution of the iron skeleton frame in Chicago, G.R. Larson and R.M. Geraniotis; Steelwork in building - thirty years’ progress, S. Bylander; Steel frame architecture versus the London Building Regulations: Selfridges, the Ritz and American technology, Jeanne C. Lawrence; Index.

'The aim of Ashgate's twelve volume series is to bring together collections of important papers on particular topics from scholarly journals, conference proceedings and other hard-to-access sources. This is a wholly laudable objective. Some of the papers in the volume under review (The Civil Engineering of Canals and Railways before 1850) cannot be found even in abundantly-resourced academic libraries. The series opens up, directly or indirectly, debates over the nature of historical evidence which arise from the profoundly different approaches to the past of historians of technology, whose works are principally represented in these volumes, industrial archaeologists and social and economic historians.' Industrial Archaeology Review, Vol. XXI, No. 1 ’...a valuable reference...Readers will recognise the value not only of the individual contributions, but also of the introductory essay that is a valuable survey and account of this development.’ The Victorian '... well selected and well organised... This work is strongly recommended for both public and academic libraries. The volume's usefulness extends beyond civil engineering students and practicing civil engineers to laypeople as well. ...gives laypeople a new way of looking at engineering structure.' E-Streams '... an excellent series with a vast amount of information... I highly recommend this volume, and for that matter, the whole series. It is a marvellous collection of articles by some of the most noted scholars in the field.' Industrial Archaeology Review, XXIV, No.2, 2002