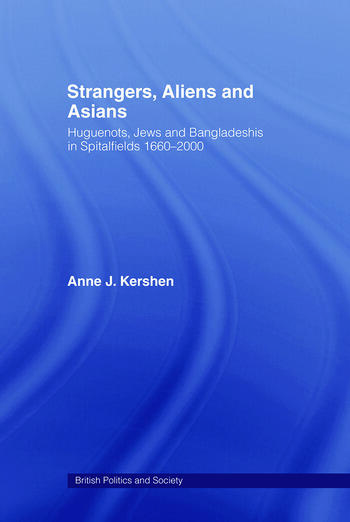 Strangers, Aliens and Asians: Huguenots, Jews and Bangladeshis in Spitalfields 1666-2000

Exploring the dynamics that drive the processes of immigrant settlement and assimilation, this fascinating book looks at whether these are solely the outcome of the temporal setting, cultural background, and the contemporaneous socio-economic and political conditions, or whether there are factors which, irrespective of the prevailing environment, are constant features in the symbiosis between the outsider and the insider.

Focusing on the area of Spitalfields in East London, this volume compares and contrasts the settlement, integration and assimilation processes undergone by three different immigrant groups over a period of almost three hundred and fifty years, and assesses their relative successes and failures. The three groups examined are the Huguenots who arrived from France in the 1670s, the Eastern European Jews coming from the Russian Empire in the last third of the nineteenth century, and the Bangladeshis who began settling in Spitalfields in the early 1960s.

For centuries Spitalfields in East London has been a first point of settlement for new immigrants to Britain, and its proximity to both the affluence of the City of London and the poverty of what is now the London Borough of Tower Hamlets means that it has been, and still is, an area ‘on the edge’. Concentrating on this district, this book examines at grass roots level the migrant experience and the processes by which the outsider may become the insider.

Acknowledgements  List of Maps  Introduction  1. People, Place and a Phenomenon  2. Home  3. Spitalfields: A Place on the Edge  4. Religion  5. Charity and Welfare  6. Mother Tongue a Bridge to Assimilation  7. Huguenots, Jews and Bangladeshis and The Spirit of Capitalism  8. Xenophobia, Anti-Alienism and Racism  9. Conclusion  Bibliography

First comprehensive look at 300 years of immigration in the Spitalfields area, although the location has received much scholarly attention

'The London neighborhood of Spitalfields has been home to minority groups for centuries and has over the years been known as Petty France, Little Jerusalem, and, now, Banglatown. Examining the neighborhood’s Huguenots emigrating from France in the 17th and 18th centuries, Eastern European Jews arriving in the last third of the 19th century, and Bangladeshis that started showing up in the 1950s, Kershen (director, Centre for the Study of Migration, U. of London, UK) thematically explores the dynamics driving the processes of immigration settlement and assimilation in London. He further seeks to assess whether immigration and assimilation patterns are solely the outcome of temporal setting, cultural background, and socio-economic and political conditions, or whether other factors come into play.' – Reference & Research Book News

Strangers, Aliens and Asians: Huguenots, Jews and Bangladeshis in Spitalfields 1666-2000