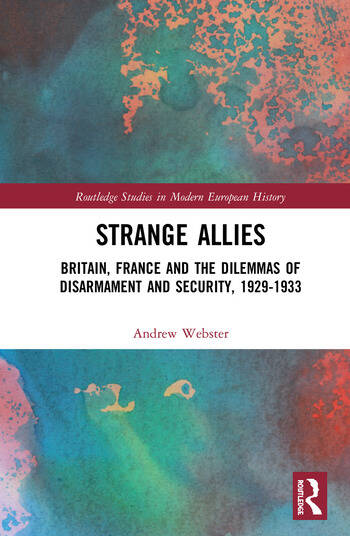 Strange Allies: Britain, France and the Dilemmas of Disarmament and Security, 1929-1933

Strange Allies examines three intersecting themes of fundamental importance to the international history of the period between the two world wars. First, and most broadly, it is a study of the international history of the pivotal ‘hinge years’, running from the onset of the Depression in late 1929 to the Nazi capture of power in Germany in early 1933. The second theme is the strategic relationship between Britain and France, the critical dynamic in the management of global and European international relations during this time of great fluidity and uncertainty. The most contentious and intractable issue that divided the two countries was the pursuit of international disarmament, which forms the third theme of the book.

is based upon extensive research in British and French archives, as well as in the archives of the League of Nations in Geneva. The book’s focus on 1929–31 in particular makes a major contribution to the international history of the interwar period by re-examining the security and strategic policies of the second Labour government in Britain and of foreign minister Aristide Briand in the post-Locarno years in France. For 1931–33, the book looks at the impact of the great financial and economic crisis of 1931 on security and disarmament planning in Britain and France. It then considers the impact of the Anglo-French relationship on the instability of Europe and on the failure of the World Disarmament Conference.

This book is the first detailed study of the Anglo-French relationship during a critical period which saw a reshaping of the boundaries of global security. Although the Anglo-French alliance is rightly seen to be pivotal to both the initial phase of implementing the Versailles settlement of 1919 and the efforts to contain Hitler and protect Europe after 1936, Strange Allies demonstrates the degree to which these states’ conflicting views of security were central to international relations in the years leading up to Hitler’s accession to power.

The trials of victory: France, Britain and disarmament after the Great War

Allies of yesterday: Britain in 1929

Security is the guardian of peace: France in 1929

An opening clash: Reparations and the Rhineland

The battle of London: The continuing pursuit of naval disarmament

The problems of 1930: The Rhineland, arbitration and European union

Annus terribilis: 1931 as a year of crisis

Strange Allies: Britain, France and the Dilemmas of Disarmament and Security, 1929-1933