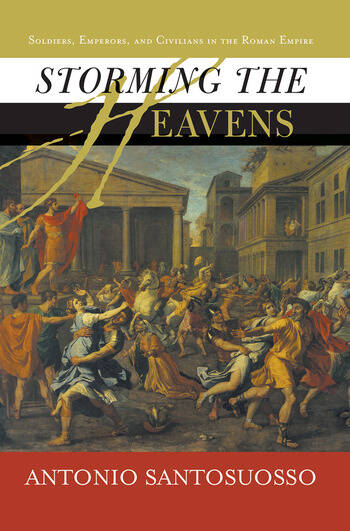 Storming The Heavens: Soldiers, Emperors, And Civilians In The Roman Empire

In the closing years of the second century B.C., the ancient world watched as the Roman armies maintained clear superiority over all they surveyed. But, social turmoil prevailed at the heart of her territories, led by an increasing number of dispossessed farmers, too little manpower for the army, and an inevitable conflict with the allies who had fought side by side with the Romans to establish Roman dominion. Storming the Heavens looks at this dramatic history from a variety of angles. What changed most radically, Santosuosso argues, was the behavior of soldiers in the Roman armies. The troops became the enemies within, their pillage and slaughter of fellow citizens indiscriminate, their loyalty not to the Republic but to their leaders, as long as they were ample providers of booty. By opening the military ranks to all, the new army abandoned its role as depository of the values of the upper classes and the propertied. Instead, it became an institution of the poor and drain on the power of the Empire. Santosuosso also investigates other topics, such as the monopoly of military power in the hands of a few, the connection between the armed forces and the cherished values of the state, the manipulation of the lower classes so that they would accept the view of life, control, and power dictated by the oligarchy, and the subjugation and dehumanization of subject peoples, whether they be Gauls, Britons, Germans, Africans, or even the Romans themselves.

Introduction -- All-Rich and Poor, Well-Born, and Commoners—Must Defend the State -- Armies of Pillagers -- Julius Caesar: Thoughts and Actions of a Commander -- Of Gods, Military Leaders, and Politicians -- "My Soldiers, My Army, My Fleet" -- How to Manage an Empire: Strengths and Pitfalls -- Enemies on the Borders, Violence at Home: Soldiers as the Makers of Emperors -- Rome Is No More: The End of the Empire -- Epilogue -- Time Line, 218 B.C.—A.D. 476 -- Roman Emperors, 27 B.C.—A.D. 476

Storming The Heavens: Soldiers, Emperors, And Civilians In The Roman Empire