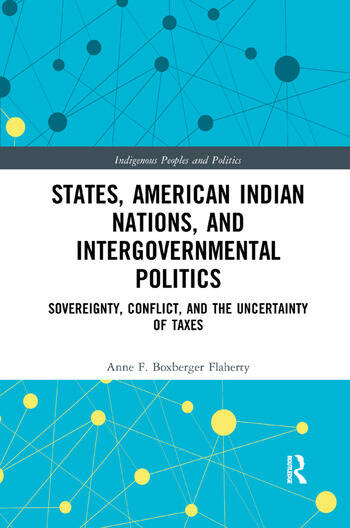 American Indian nations are sovereign political entities within the United States. They have complex relationships with the federal government and increasingly with state governments. Regulatory conflict between Native nations and states has increased as Native nations have developed their own independent economies and some states have sought to assert their control over reservation territory. This book explores the intergovernmental conflict between Native nations and states, with a focus on the tension over the enforcement of state cigarette taxes for on-reservation sales. Anne F. Boxberger Flaherty asks: when do states and Native nations come to agreement, when do they disagree, and why are states sometimes willing to extend great efforts to assert their taxes on reservations?

This book will be interest to scholars and researchers of Indigenous Politics, Native American Indian Politics, State Politics, and Intergovernmental Politics.

1. Native Sovereignty, Intergovernmental Politics, and the Uncertainty of Taxes

2. Intergovernmental Relations between Native Nations, the Federal Government, and States: The Historical Challenges of Being "Domestic Dependent Nations"

4. Sovereignty, Tobacco, and the Power to Tax