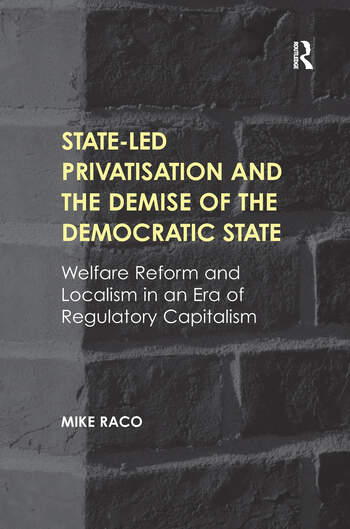 State-led Privatisation and the Demise of the Democratic State: Welfare Reform and Localism in an Era of Regulatory Capitalism

For decades now we have been told that we are living through a governance revolution. Gone are the days when government agencies and bureaucrats told us what to do and how to do it. We are no longer clients of the state but empowered citizens who are able to take greater control over our own lives and the activities of those who govern in our name. Across the world the prevailing narrative has become one of Good Governance, devolution, liberation, and freedom of expression. In policy fields as diverse as development planning, healthcare, and public transport a neo-pluralist rhetoric has emerged based on the principles of ’co-production’ and partnership working. And yet at the same time a curious paradox is emerging. Whilst the prevailing zeitgeist is one of openness and citizen empowerment, this book will show that in reality new modes of governance are emerging in which state controls have actually been expanded into many spheres of life that were previously left unregulated. For some a new political economy of ’regulatory capitalism’ has emerged and this, in turn, has ushered in unprecedented forms of state-led privatisation under which democratically-elected politicians have voluntarily handed over their powers, responsibilities, and resources to new corporate elites who promise to deliver services in more efficient and equitable ways. As the discussion will show, in reality the rhetoric of Good Governance has, therefore, been used to legitimate the wholesale transfer of welfare assets and services beyond the democratic control of state actors and the citizens that they represent. Privatisation has become a new utopianism that involves a revolution in ways of thinking about democracy, governance, and urban management, the implications of which will be felt by current and future generations.

Mike Raco is Professor of Urban Governance and Development at the Bartlett School of Planning, University College London, UK.

’This is a confusing and uncertain time, one in which promises of localism and devolved power are translated into new forms of regulation, authoritarianism, and corporate power. It is this world that Mike Raco confronts so clearly and effectively here. He convincingly cuts through the confusion to show not only who gains and who loses from the new arrangements, but also - equally important - how the process works.’ Allan Cochrane, The Open University, UK ’If you want to understand how the state is being transformed in the name of localism and efficiency to favour global capital and to fragment governance, then read this book. Mike Raco’s analysis moves from insightful theoretical reflections to persuasive case studies to show how the new regulatory state generates profits, creates a new class of experts, and undermines democracy.’ Bob Jessop, Lancaster University, UK

State-led Privatisation and the Demise of the Democratic State: Welfare Reform and Localism in an Era of Regulatory Capitalism