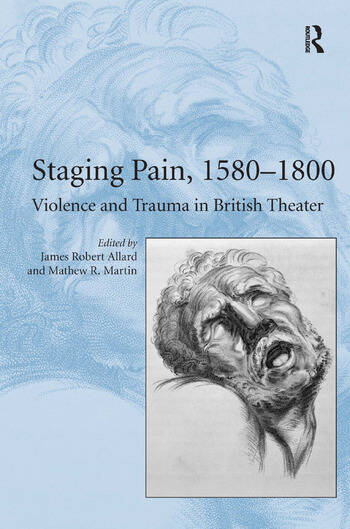 Bookending the chronology of this collection are two crucial moments in the histories of pain, trauma, and their staging in British theater: the establishment of secular and professional theater in London in the 1580s, and the growing dissatisfaction with theatrical modes of public punishment alongside the increasing efficacy of staging extravagant spectacles at the end of the eighteenth century. From the often brutal spectacle of late medieval mystery plays to early Romantic re-evaluations of eighteenth-century appropriations of spectacles of pain, the essays take up the significance of these watershed moments in British theater and expand on recent work treating bodies in pain: what and how pain means, how such meaning can be embodied, how such embodiment can be dramatized, and how such dramatizations can be put to use and made meaningful in a variety of contexts. Grouped thematically, the essays interrogate individual plays and important topics in terms of the volume's overriding concerns, among them Tamburlaine and The Maid's Tragedy, revenge tragedy, Joshua Reynolds on public executions, King Lear, Settle's Moroccan plays, spectacles of injury, torture, and suffering, and Joanna Baillie's Plays on the Passions. Collectively, these essays make an important contribution to the increasingly interrelated histories of pain, the body, and the theater.

James Robert Allard and Mathew R. Martin are both Associate Professors in the Department of English Language and Literature at Brock University, Canada.

'An impressive contribution to the study of early modern drama and its cultural contexts, this collection richly explores the uses of pain in the communal space of the theater to fashion identities, confront collective wounds, and rework traumatic histories, while also challenging us to think more carefully about the ways early modern stagings of trauma both resist and resonate with modern theoretical concepts.' Deborah Willis, University of California, Riverside, USA ’Interesting, but specialized...Recommended.’ Choice