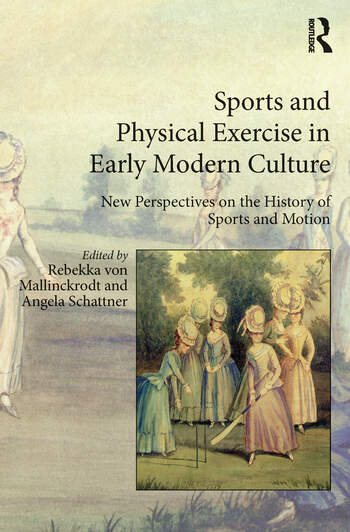 Sports and Physical Exercise in Early Modern Culture: New Perspectives on the History of Sports and Motion

It is often assumed that a recognisably modern sporting culture did not emerge until the eighteenth century. The plethora of physical training and games that existed before 1700 tend to fall victim to rigid historical boundaries drawn between "modern" and "pre-modern" sports, which are concerned primarily with levels of regulation, organization and competitiveness. Adopting a much broader and culturally based approach, the essays in this collection offer an alternative view of sport in the early modern period. Taking into account a variety of competitive as well as non-competitive forms of sport, physical training and games, the collection situates these types of activities as institutions in their own right within the socio-cultural context of early-modern Europe.

Treating the period not only as a precursor of modern developments, but as an independent and formative era, the essays engage with overlooked topics and sources such as court records, self-narratives, and visual materials, and with contemporary discussions about space, gender and postcolonial studies. By allowing for this increased contextualization of sport, the collection is able to integrate it into more general historical questions and approaches.

The volume underlines how developments in early modern sport influenced later developments, whilst at the same time being thoroughly shaped by contemporary notions of the body, status and honour. These notions influenced not only the contemporary sporting fashion but the adoption of sports in elite education, the use of sports facilities, training methods and modes of competition, thus offering a more integrated idea of the place of sport in early modern society.

2 Sport and Recreation in Sixteenth-Century England: The Evidence of Accidental Deaths

3 Putting Sports in Place: Sports Venues in Sixteenth- and Seventeenth-Century England and their Social Significance

II: Sport for Money and Glory? Commercialisation and Professionalisation

4 The Capital of Tennis: Jeux de Paume as Urban Sport Facilities in Fifteenth- and Sixteenth-Century Paris

6 An ‘Art and a Science’: Eighteenth-Century Sports Training

Rebekka von Mallinckrodt is Professor for Early Modern History at the University of Bremen. She has worked in the field of religious studies, history of the body as well as postcolonial studies. With regard to sports and physical exercise she has published Bewegtes Leben - Körpertechniken in der Frühen Neuzeit (Body Techniques in the Early Modern Period), exposition catalogue Herzog August Library Wolfenbüttel (Harrassowitz 2008) as well as several articles on the cultural history of swimming, diving and running.

Dr Angela Schattner is Max Weber 2016/17 Fellow at the University of Bremen and was Research Fellow in Early Modern History at the German Historical Institute London from 2010-2016. She specialises in the social and cultural history of Early Modern Britain and Germany and the history of the body, disability, sports, exercise and leisure. She is the author of Zwischen Familie, Heiler und Fürsorge. Das Bewältigungsverhalten von Epileptikern in deutschsprachigen Gebieten des 16.-18. Jahrunderts.

Sports and Physical Exercise in Early Modern Culture: New Perspectives on the History of Sports and Motion