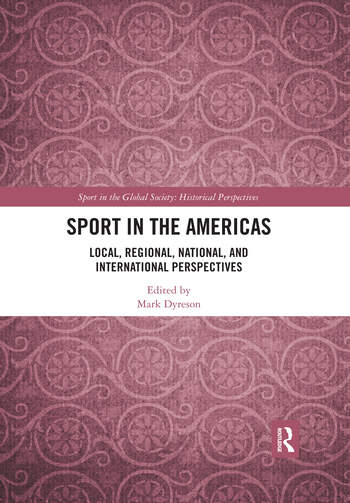 Sport in the Americas: Local, Regional, National, and International Perspectives

Statues of fans as nostalgic monuments to the North American devotion to baseball, Canadian lacrosse and ethnic ideologies, the rise of modern sports and class sensibilities in São Paulo, the inaugural world championship for women’s hockey, and national memories of Olympic Games hosted on US soil. What do these seemingly disparate themes have in common? They each comprise a facet of sporting experiences in the western hemisphere that took place between the 1890s and the 1990s.

This collection offers new insights on the role of sport in defining local, regional, national, and international cultures in the western hemisphere. The essays offer historical perspectives on the power of sport to create common ground in modern societies while simultaneously exploring how it serves to mark cultural boundaries and reinforce cultural identities. From national pastimes to ethnic traditions, from class sensibilities to racial ideologies, Sport in the Americas presents novel contributions that examine both the singular and manifold patterns of culture that sport animates.

The chapters in this book were originally published as a special issue in The International Journal of the History of Sport.

1. Standing Out from the Crowd: Imaging Baseball Fans through Sculpture

2. Reclaiming Canada Through Its ‘Ancient’ Sport: Lacrosse and the Native Sons of Canada in Late 1920s Alberta

3. The Rise of Modern Sport in Fin de Siècle São Paulo: Reading Elite and Bourgeois Sensibilities, the Popular Press, and the Creation of Cultural Capital

5. Region and Race: The Legacies of the St Louis Olympics

Mark Dyreson is a Professor of Kinesiology and History at the Pennsylvania State University, USA; the Director of Research and Educational Programs at the Penn State Center for the Study of Sport in Society; the Managing Editor of The International Journal of the History of Sport; a former President of the North American Society for Sport History; and a Fellow of the National Academy of Kinesiology.

Sport in the Americas: Local, Regional, National, and International Perspectives