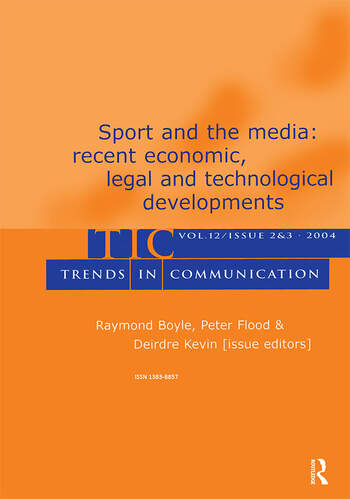 Sport and the Media examines how reliable sportscasting is in the anchor role, reviews the development of sportscasting and specialized sporting services as a response to audience demand, and questions how well the sporting enthusiast--the fan--is being served by later, unanticipated developments. While sport has had a long symbiotic relationship with communication systems, the advent of a digital media age has intensified that relationship, giving evidence of both continuity and substantial change in this relationship as both media systems and popular culture have entered a new century.


Collectively, the articles give an authentic flavor of the issues--real and incipient--surrounding sports broadcasting, the media, and the audience as the next round of media consolidation and investment appears to be starting. In particular, they pose questions as to whether sports as a 'killer application' has actually encountered some natural limit, and whether the audience at-large has been well served within the more recent developments.

Raymond Boyle teaches in the Department of Film and Media Studies at the University of Stirling and is a  member of the Stirling Media Research Institute. Raymond Boyle sits on the Editorial Board of Media, Culture and Society and is co-author of Sport and National Identity in the European Media (1993) and, with Richard Haynes, of Power Play: Sport, the Media and Popular Culture (2000).