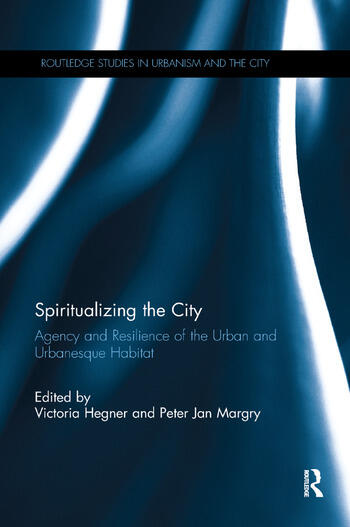 Spiritualizing the City: Agency and Resilience of the Urban and Urbanesque Habitat

Urban spaces have always functioned as cradles and laboratories for religious movements and spiritualities. The urban forms a central and nourishing agent for the creation of new religious expressions, and continually negotiates new ways of being spiritual and establishing spiritual ideas and practices.

This book explores the intense and complex interplay between the (post) modern city and new religious and spiritual movement, bringing the city and its annexes into the foreground of current research into religion. It develops a new, ethnography-based analysis of the ways in which the pluralist experience of the "urban" inscribes itself into various religious practices and vice versa: how do religiosity and spirituality appropriate and transform meanings of the urban? It focuses on new religious expressions, cosmologies and ways of life that go beyond established belief systems and religious understandings, and explores new conceptions of the word "urban" in a world of increasingly extended urban environments. The book examines how cities are both considered as sites and sources of spirituality, where the globalization of religions takes place as well as the fact that globalization is linked closely to the process of localization. The socio-cultural and political uniqueness of the specific urban context are analyzed to present an innovative perspective on how the interplay between the urban, spiritual and religious should be understood.

This book brings a timely new perspective and will be of interest to academics and students in geography, sociology, urban studies, cultural studies and anthropology, as well as for urban planners and policy makers.

1. Introduction: spiritualizing the urban and the urbanesque

Part I: The politics of religious plurality and identity

3. Preserving Catholic space and place in "The Rome of the West"

4. Praying in Berlin’s Asiatown: religious place-making in a multi-ethnic bazaar

5. Framing the Pope within the urban space: John Paul II and the cityscape of Kraków

6. Religious mediations in a dense cityscape: experience of Catholic and Buddhist spaces in Hong Kong

8. Multiculturalism, veiling fashion and mosques: a religious topography of Islam in Berlin

Part III: The agency of body and senses in spiritualized practices

9. The dance floor as urban altar: how ecstatic dancers transform the lived experience of cities

11. "Singing is prayer two times": a transnational perspective on "religious music," musical performance and urban religiosity in Cameroon and Switzerland

Victoria Hegner is Senior Researcher at the Department of Cultural Anthropology/European Ethnology at the Georg-August-University, Göttingen, Germany.

Peter Jan Margry is Professor of European Ethnology at the University of Amsterdam, the Netherlands.

Spiritualizing the City: Agency and Resilience of the Urban and Urbanesque Habitat