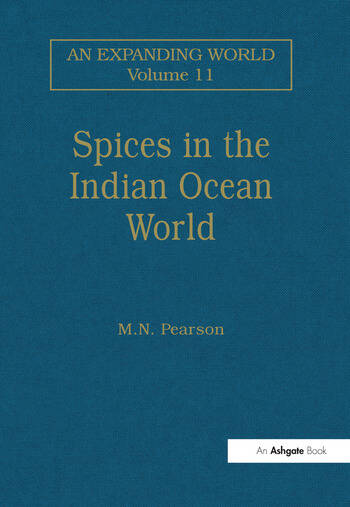 Spices in the Indian Ocean World

By turns exotic, valuable and of cardinal importance in the development of world trade, spices, as the editor reminds us, are today a mundane accessory in any well-equiped kitchen; in the 15th-18th centuries, the spice trade from the Indian Ocean to markets all over the world was a major economic enterprise. Setting the scene with extracts from Garcia da Orta's fascinating contemporary Colloquies on the drugs and simples of India [Goa 1563], this collection reviews trade in a wide variety of spices, exploring merchant organisation, transport and marketing as well as detailing the quantitative evidence on the fluctuations in spice trade. The evidence and historical debates concerning the 16th-century revival of the Mediterranean and Red Sea spice trade at this time, are fully represented here

Contents: Introduction; Colloquies on the simples and drugs of India: cinnamon, cloves, mace and nutmeg, pepper, Garcia da Orta; The spice trade of Mamluk Egypt, Walter J. Fischel; Spice prices in the Near East in the 15th century, E. Ashtor; Pepper prices before da Gama, Frederic C.Lane; Le repli vénitien et égyptien et la route du Cap, 1496-1533, Vitorino Magalha]es Godinho; The Mediterranean spice trade: further evidence of its revival in the 16th century, Frederic C. Lane; The return cargoes of the Carreira in the 16th and early 17th century, Niels Steensgaard; The changing pattern of Europe’s pepper and spice imports, ca. 1400-1700, C.H.H. Wake; The Portuguese factory and trade in pepper in Malabar during the 16th century, Jan Kieniewicz; Pepper gardens and market in precolonial Malabar, Jan Kieniewicz; The Portuguese impact on the production and trade in Sri Lanka cinnamon in Asia in the 16th and 17th centuries, C. R. de Silva; The Portuguese and the trade in cloves in Asia during the 16th century, C.R. de Silva; A note on Portuguese reactions to the revival of the Red Sea spice trade and the rise of Atjeh, 1540-1600, C. R. Boxer; The changing balance of the southeast Asian pepper trade, John Bastin; Restrictive trade regimes: VOC and the Asian spice trade in the 17th century, Om Prakash; The economics of uncertainty: the structural revolution in the spice trade, 1480-1640, Peter Musgrave; Index.

Spices in the Indian Ocean World