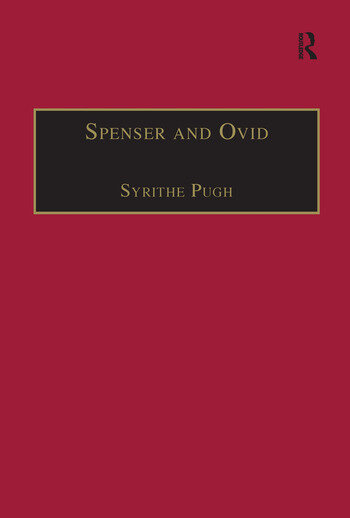 In Spenser and Ovid, Syrithe Pugh gives the first sustained account of Ovid's presence in the Spenser canon, uncovering new evidence to reveal the thematic and formal debts many of Spenser's poems owe to Ovid, particularly when considered in the light of an informed understanding of all of Ovid's work. Pugh's reading presents a challenge to New Historicist assumptions, as she contests both the traditional insistence on Virgil as Spenser's prime classical model and the idea it has perpetuated of Spenser as Elizabeth I's imperial propagandist. In fact, Pugh locates Ovid's importance to Spenser precisely in his counter-Virgilian world view, with its high valuation of faithful love, concern for individual freedom, distrust of imperial rule, and the poet's claim to vatic authority in opposition to political power. Her study spans Spenser's career from the inaugural Shepheardes Calender to what was probably his last poem, The Mutabilitie Cantos, and embraces his work in the genres of pastoral, love poetry, and epic romance.

Contents: Introduction; Spenser's new Fasti: Ovidian strategies of protest in The Shepheardes Calender; Epic idolatry and concupiscent romance in Book I of The Faerie Queene; Ovid and the limitations of temperance in Book II of The Faerie Queene; Unbinding love: Britomart's Ovidian inquest; Vates profugus: love, exile and authority in the poems of 1595; Sors mea rupit opus: exile and the 1596 Faerie Queene; Spenser, Ovid and political myth-making: Mutabilitie's challenge to the ideology of power; Bibliography; Index.

'Syrithe Pugh gives us the first sustained account of Ovid's presence in the Spenser canon. She is a gifted intertextual critic, as much at home in Ovid as she is in Spenser ... heady and eloquent, an important contribution to early modern studies.' Patrick Cheney, Professor of English, Penn State University 'Pugh provides a number of persuasive new readings of familiar episodes...a rigorously and intelligently argued book, which makes a strong case, and will help us to understand the complicated and problematic relationship between Renaissance authors and their classical forebears.' Times Literary Supplement 'Pugh's study, magisterial in its marshalling of parallels between Ovid and Spenser on programmatic level, is perhaps most valuable for enabling future commentary to explore the poem in greater textural details and thereby to trace more precisely the line from Ovid through Chaucer and Ariosto to his principal Elizabethan avatar.' Renaissance Quarterly '... Pugh's discussions are continuously illuminating.' Modern Languages Review 'Pugh's book is a fertile, refreshingly readable study that prompts reexamination of Ovidian influence upon Spenser's poetry and career. Pugh displays an impressive command of Ovid's and Spenser's careers and writings, she demonstrates convincingly the extensive reach of Spenser awareness of Ovid's corpus, and she makes a strong case for reassessing the nature and purpose Spenser assigned to his poetry and career... Pugh's book [...] makes a crucial contribution to a reassessment of Ovid's influence upon Spenser's writing and career.' Sixteenth Century Journal 'Through a lively and sustained reading of the intertextual relationship between Spenser and Ovid, Syrithe Pugh helps to bridge the gap between the contrasting versions of Ovid currently circulating in Spenser criticism and in classical studies... uncovers a wealth of covert political criticisms, is a must-read for Spenserians... Spenser and Ovid makes an important contribu