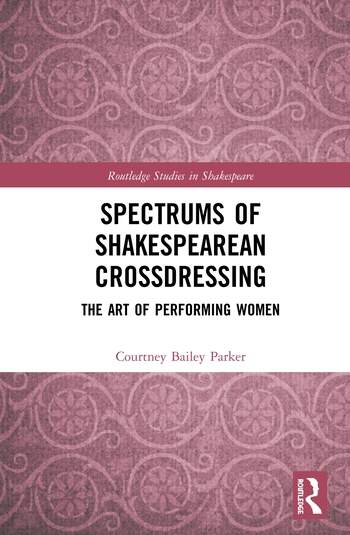 Spectrums of Shakespearean Crossdressing: The Art of Performing Women

Since young male players were the norm during the English Renaissance, were all cross-dressed performances of female characters played with the same degree of seriousness? Probably not. Spectrums of Representation in Shakespearean Crossdressing examines these varied types of female characters in English Renaissance drama, drawing from a range of play texts themselves in order to investigate if evidence exists for varying performance practices for male-to-female crossdressing. This book argues for a reading of the representation of female characters on the English Renaissance stage that not only suggests categorizing crossdressing along a spectrum of theatrical artifice, but also explores how this range of artifice enriches our understanding of the plays. The scholarship surrounding cross-dressing rarely makes this distinction, since in our study of early modern plays we tend to accept as a matter of course that all crossdressing was essentially the same. The basis of Spectrums of Representation in Shakespearean Crossdressing is that it was not.

Chapter One: The Disguised Heroine and Castiglione’s Shadow in Shakespeare’s Cross-Dressed Comedies

Chapter Two: An Amazon in the City: The Roaring Girl's Theatrical Memorialization of Mary Frith

Chapter Three: Representing the Tragic Noblewoman in The Duchess of Malfi, Romeo and Juliet, and Titus Andronicus

Courtney Bailey Parker is an Assistant Professor of English & Theatre Studies at Greenville University in Greenville, Illinois. She earned her Ph.D. in English Literature from Baylor University and her B.A. in the same subject from Mercer University.

Spectrums of Shakespearean Crossdressing: The Art of Performing Women