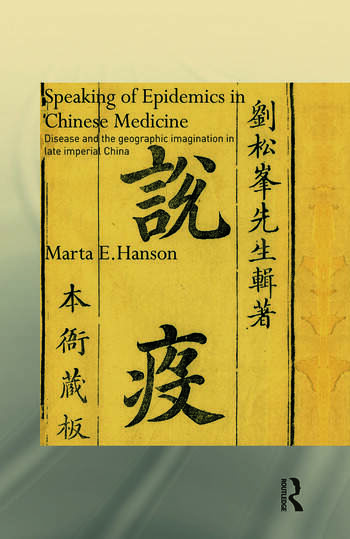 Speaking of Epidemics in Chinese Medicine: Disease and the Geographic Imagination in Late Imperial China

The persistence of wenbing and other Chinese disease concepts in the present can be interpreted as resistance to the narrowing of meaning in modern biomedical nosology. Attention to conceptions of disease and space reveal a previously unexamined discourse the author calls the Chinese geographic imagination. Tracing the changing meanings of "Warm diseases" over two thousand years allows for the exploration of pre-modern understandings of the nature of epidemics, their intersection with this geographic imagination, and how conceptions of geography shaped the sociology of medical practice and knowledge in late imperial China.

Speaking of Epidemics in Chinese Medicine opens a new window on interpretive themes in Chinese cultural history as well as on contemporary studies of the history of science and medicine beyond East Asia.

Marta Hanson is Assistant Professor in the Department of the History of Medicine at Johns Hopkins University, USA. Her research interests are in the history of medicine, disease, and public health in China and the cultural history of Chinese arts of memory.

Speaking of Epidemics in Chinese Medicine: Disease and the Geographic Imagination in Late Imperial China