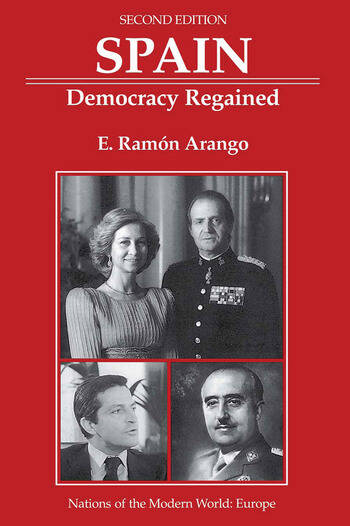 Since the death of Franco in 1975, Spain has passed from repression through renewal to democracy, restored for the first time since 1936. Having survived the threat to its very existence in 1981, democratic Spain?now a member of the European Union and the North Atlantic Treaty Organization?seems as secure as any of its European neighbors. The accession to power in 1982 of the first socialist government in Spanish history marked the smooth transition from right to left that many, including Arango, believe was the crucial rite of passage to stable democracy.Spain: Democracy Regained is a greatly expanded and revised version of Spain: From Repression to Renewal. Aside from his presentation of historical and geographical background and of the Franco years, the author has rewritten the remainder of his study, utilizing a wide array of new information and interpretation. Arango explores the function of the military, reinterprets the role of the king in the transition and in the 1981 crisis, and provides a thorough analysis of political parties. He reexamines the state of the economy under the socialist government and reassesses Spain's most intractable problem?ETA violence?and its greatest strength?the exuberant Spanish culture that was given international exposure in 1992 at the World's Fair in Seville and at the Olympic Games in Barcelona. Woven throughout are Arango's fresh insights into Spanish society and politics during the socialist decade.

List of Tables and Illustrations, Acknowledgments, List of Acronyms, Introduction, ETERNAL SPAIN, The Land, The People, NEW SPAIN, Notes, Part One Roman Colony to Dictatorship, Conquest and Reconquest, Invasion from the North, The Muslim Conquest, The Reconquest, The Hapsburg Dynasty: Glory and Decadence, Notes, Spain Under the Bourbons, The Napoleonic Interlude, Political Developments, The Second Restoration, The Role of the Military, The Last Decade of Bourbon Rule, Notes, Democracy and Civil War, THE SECOND REPUBLIC, The Constitution of 1931, The Struggle Between Left and Right, The Second Republic: An Appraisal, CIVIL WAR, The Republican Camp, The Rebel Camp, The Two Ideologies, Notes, The Franco Regime, The First Phase: 1936-1941, The Second Phase: 1942-1952, The Third Phase: 1953-1958, The Fourth Phase: 1959-1975, Franco and the Military Throughout the Four Phases of the Regime, The Franco Regime: An Evaluation, Notes, Part Two Return to Democracy, The Transition (1975-1978), Historic Rendezvous: The Encounter of Juan Carlos and Adolfo Suàrez, The Elections of 1977, Compromise and Consensus, Notes, Collapse of the Center (1979-1982), The UCD in Trouble, The Political Demise of Adolfo Suàrez, The Crisis of February 1981, Disintegration of the UCD, Swing to the Left, Notes, The Political System, The Monarchy, The Government, The Legislature, The Constitutional Court and the Ombudsman, Autonomous Communities, The Process of Autonomy: An Appraisal, Notes, Part Three Political Forces, Political Parties, Discontinuity in the Spanish Party System, Parties of the Transition, Regionalist Parties, Notes, Violence and Terrorism, Notes, Part Four The Socioeconomic Context, The Economy, The Tradition of Autarky, Spain Rejoins the World, The Economic Miracle Falters, The Economy and the Socialists: The 1980s, Spain Joins Europe, The PSOE's Economic Performance: An Evaluation, Notes, Culture and Society, Spanish Culture Under Franco, Post-Franco Culture and Society, Spanish Culture Reinvented, Notes, Part Five Spain in the New Europe, The PSOE in Power, Accomplishments, The PSOE in Trouble, Dissension Within the PSOE, The 1993 Elections, Democracy Regained, Spain in the World Today, Final Musings, Notes, Bibliography, About the Book and Author, Index