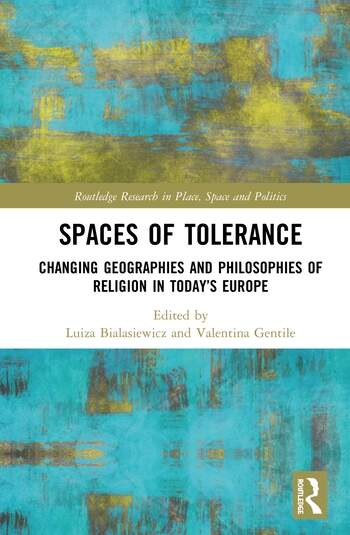 Spaces of Tolerance: Changing Geographies and Philosophies of Religion in Today’s Europe

This book offers interdisciplinary and cross-national perspectives on the challenges of negotiating the contours of religious tolerance in Europe.

In today’s Europe, religions and religious individuals are increasingly framed as both an internal and external security threat. This is evident in controls over the activities of foreign preachers but also, more broadly, in EU states’ management of migration flows, marked by questions regarding the religious background of migrating non-European Others. This book addresses such shifts directly by examining how understandings of religious freedom touch down in actual contexts, places, and practices across Europe, offering multidisciplinary insights from leading thinkers from political theory, political philosophy, anthropology, and geography. The volume thus aims to ground ideal liberal democratic theory and, at the same time, to bring normative reflection to grounded, ethnographic analyses of religious practices. Such ‘grounded’ understandings matter, for they speak to how religions and religious difference are encountered in specific places. They especially matter in a European context where religion and religious difference are increasingly not just securitised but made the object of violent attacks.

The book will be of interest to students and scholars of politics, philosophy, geography, religious studies, and the sociology and anthropology of religion.

Toleration and Tolerance: Between Belief and Identity – Peter Jones

Religious Toleration and the Securitization of Religion - Sune Laegaard

The Limits of Toleration towards Syrian Refugees in Turkey: From Guesthood to Ansar Spirit - Ayhan Kaya and Ozan Kuyumcuoğlu

Mediating (in)visibility and publicity in an African church in Ghent: religious place-making and solidarity in the European city - Luce Beeckmans

Luiza Bialasiewicz is a political geographer and Professor of European Governance at the University of Amsterdam, where she also co-directs the Amsterdam Centre for European Studies (ACES). Her research focuses on European migration policy, within European cities and at the borders of Europe.

is Assistant Professor in Political Philosophy at LUISS University of Rome and Guest Professor at Antwerp University. She specialises in normative political philosophy, liberal theory, and the work of John Rawls. Her research focuses on stability, pluralism and reciprocity, tolerance, and equality.

"This exciting collection of original articles addresses both theoretical and practical questions about toleration. It does so in ways that throw fresh light on the complex problems of understanding and negotiating the 'spaces', both literally and metaphorically, for the practice of toleration in a wide variety of contexts, with particular but not exclusive reference to the sphere of religious toleration. Anyone who is seriously interested in toleration should find plenty to think about in this stimulating and sometimes provocative book."

Spaces of Tolerance: Changing Geographies and Philosophies of Religion in Today’s Europe