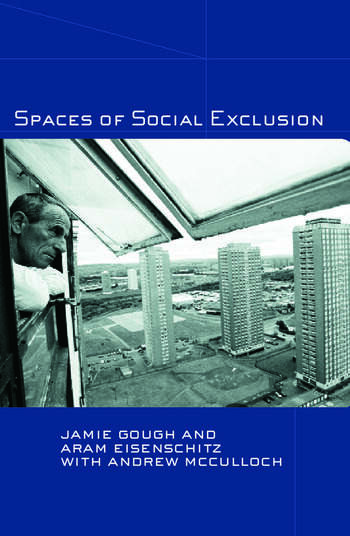 To varying extents in developed countries a minority of the population suffers from deprivation. Britain’s Labour government in particular has sought to deal with this through the notion of 'social exclusion', and similar ideas have been developed in other countries. This important text explores the various forms of this contemporary economic and social disadvantage and, in particular, investigates its social and spatial causes and the role of space in policies addressing disadvantage. Arranged in three distinct parts, it:

This book is the first to systematically analyze the role of geography in poverty and social exclusion, and deals with the roles of ‘globalization’ and localism. Though its main focus is Britain, it investigates similarities and differences in other developed countries.

Spaces of Social Exclusion is a key text for researchers and students throughout the social sciences, social policy, human geography and urban studies, as well as policy makers and practitioners in social and urban policy.

PART I THE REALITY, IDEOLOGIES AND MANAGEMENT OF POVERTY

Chapter 1 Management of the poor, ideologies of poverty 1. The creation of poverty 2. Obscuring the causes of poverty 3. Coercion versus incorporation, separation versus integration 4. Pushing the poor into work 5. Inventing and tackling the underclass and the culture of poverty 6. Intervening into consumption 7. Political inclusion and exclusion 8. Continuity, cycles and dilemmas Chapter 2 Space and the management of the poor 1. Poverty policy using space 2. The nation and the world 3. The nation, the locality and the individual 4. The nation and its regions 5. The city, ‘rurality’ and the suburbs 6. The neighbourhood 7. Conclusion: Contortions of space in the management of poverty Chapter 3 Patterns of social exclusion 1. What are poverty and social exclusion? 2. Incomes 3. Employment and the state’s reaction to it 4. Aspects of deprivation and their relation to income 5. Social oppressions: poverty and social exclusion 6. Neighbourhoods, localities and regions 7. Conclusion

Introduction to Part II Chapter 4 Jobs, the economy and social exclusion 1. Introduction 2. Capitalism, poor jobs and unemployment 3. The systematic unevenness of poverty creation  4. The deepening of poverty in the present period 5. A long crisis of capitalism Chapter 5 How the state excludes 1. The state and the poor 2. State spending, taxation and poverty 3. How public services fail the poor 4. Neoliberal reforms of state services and their impact on social exclusion 5. Capitalism, the family, and incomes from the state 6. The breakdown of the postwar settlement 7. Cuts in benefits and imposition of family dependence 8. Retirement incomes and the casino economy 9. ‘Welfare to work’ 10. Conclusion: the neoliberal state exacerbates inequality Chapter 6 Social reproduction and social exclusion 1. Working class reproduction: privatism and inequality 2. The rise of the nuclear family and change in gender divisions of labour 3. The decline of neighbourhood survival strategies of the poor 4. Authority, cultural capital and stigmatisation 5. Housing tenure: the market versus decent housing for the poor 6. Residential exclusion and concentration of the poor 7. Access to services and service spaces 8. Immobilised by the car 9. Damaged by commodities 10. Committing crime and disorder, and neighbourhood control 11. The impact of crime on the poor: fear and policing 12. Social life deepens poverty Chapter 7 Excluding societies 1. Excluded in every field of life 2. Popular attitudes towards the poor 3. Social oppressions, class and social exclusion 4. National regimes and social exclusion Conclusion to Part II

Chapter 8 Consensus strategies and their ambiguities 1. The contemporary consensus over poverty 2. Welfare to work 3. Education, training and ‘enterprise’4. The new localism: decentralisation and spatial fragmentation 5. Small area regeneration: local targeting and community mobilisation  6. Entrepreneurship and small business 7. The social economy 8. Environmental improvement 9. Partnership: governance, not government 10. Consensus and political differences Chapter 9 Neoliberalism: markets for the poor? 1. Opening opportunities for the poor through markets 2. Why neoliberal strategy fails the poor 3. Reinterpreting the promise and failures of neoliberalism  4. Racism and rightwing populism as a strategy against poverty Chapter 10 Conservative interventionism: social inclusion? 1. From Thatcherism to New Labour 2. From the underclass to the social excluded 3. Conservative interventionism versus social exclusion 4. Post-industrial cities, cultural diversity and social mix 5. Failures of social inclusion 6. The contradictions of conservative interventionism Chapter 11 Associationalism: social democracy from below? 1. Postmodern social democracy 2. Social theory and the optimism of associationalism 3. Social inclusion for all 4. Critique of associationalism 5. Associationalism and the ghost of class struggle Chapter 12 Socialist strategy for inclusion 1. From object to subject of politics 2. Who can fight exclusion?: the scales of collectivity  3. Political focuses, holism and the complexity of exclusion 4. The social economy: small-scale and community socialisation 5. Different scales of struggle 6. Influencing and reconstructing the state 7. An inclusive socialist society Bibliography