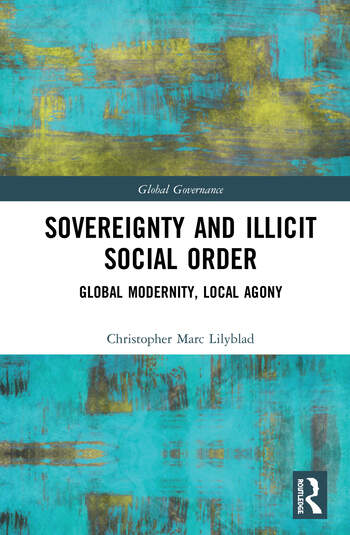 This book demonstrates how illicit social orders (established by gangs, terrorists, mafias, rebels, or other insurgent forces) arise from competition over territory, authority, and institutions in local arenas; and assesses their sobering implications for modern, national state sovereignty from the analytical vantage of global governance.

In a world where sovereignty remains the foundational principle for international order, territories ruled by gangs, mafias, rebels, terrorists, and other insurgent forces tend to be viewed as blanks on our cartographic and mental maps of global governance. Countering this narrative, Lilyblad argues that while ‘illicit social orders’ may not conform to the way we think our world should be governed, they actually make up a substantial part of how it is governed. This book offers a thorough account of the processes and inner workings through which illicit social orders develop and ipso facto contest sovereignty.

1. Modernity and the Global Framework of Sovereignty

3. The Constitution of Illicit Authority

4. The Institutionalization of Illicit Social Order

5. Globalization and Localized Fragility in Brazil

Dr Christopher Marc Lilyblad is a scholar and policy advisor in global governance and development. Currently serving as a program specialist for policy and strategy with the United Nations Development Program, he previously held research appointments at Harvard University, Oxford's Changing Character of War Centre, and the European Council on Foreign Relations. As a development practitioner, he has also served in managerial and advisory roles with the development services of the European Union and the Grand Duchy of Luxembourg. His research has featured in several chapters of the edited volume Reducing Armed Violence with NGO Governance, the journal Territory, Politics, Governance, and the Routledge Handbook of NGOs and International Relations. Christopher holds a doctorate from the University of Oxford, where he attended as a Clarendon Scholar and concurrently held the Peter J. Braam scholarship in International Development at Merton College.