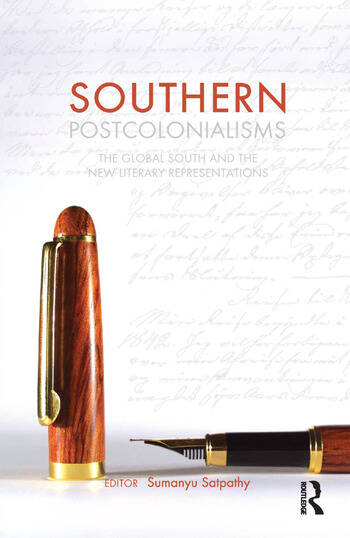 Southern Postcolonialisms: The Global South and the 'New' Literary Representations

Southern Postcolonialisms is an anthology of critical essays on new literary representations from the Global South that seeks to re-invent/reorient the ideological, disciplinary, aesthetic, and pedagogical thrust of Postcolonial Studies in accordance with the new and shifting politico-economic realities/transactions between the North and the South, as well as within the Global South, in an era of globalization.

Since the emergence of Postcolonial Theory in the 1980s, the shape of the world has changed dramatically. Old Cold War boundaries have shifted in the wake of the collapse of communism, Globalization, on an unprecedented scale, has dramatically changed the meaning of time and space. The rise of the US as a new imperial power has profound implications for the world order. In the South, new emerging markets have challenged the older division of industrial ‘first world’ and non-industrial ‘third world’.

In most parts of the world, the academy is struggling to keep up with these developments. One result has been a major transnational turn in the humanities and social sciences. Terms like ‘world history’, ‘globalization’, ‘glocalization’ and ‘transnationalism’ now dominate academic agendas worldwide.

This volume will interest those in language and literature, literary criticism, South Asian studies, and postcolonial studies.

1. Acknowledgements  2. Foreword by Rajeshwari Sundar Rajan  3. Introduction   'Southern Postcolonialisms: The Global South and the ‘New’ Literary Representations' by Sumanyu Satpathy  Part I: Canons of the New  4. A balance of Stories: The Making of a Discipline by Sue Thomas 5. English in an Uneven World: Literature in English Transition by Meenakshi Mukherjee 6. The toger that Pounced: The African Writers Series (1962-2003) by Robert Fraser 7. Indian Ocean Testimonies: Narrative and Governmentality between South Africa and India by Isobel Hofmeyer 8. Rushdie’s Indian Literature and Ours  by Sumanyu Satpathy 9. O.V. Vijayan – The Echo of the Cupola (Literatures-New Literatures) by Divya Dwivedi Part II: Pedagogies from the Postcolony  10. The New English Literatures and the Globalization of Tertiary Education by Dieter Riemenschneider  11. Getting In and Out of the Dark Room: Canadian Texts as Neutral Ground for Self-Expression and Empathy in Conflicts by Danielle Schaub 12. Pedagogy of Indian Partition Literature in the Light of Trauma Theory by Beerendra Pandey 13. Decolonizing the Classroom: In Search of ‘New’ Pedagogies for ‘New’ Literatures? by Brinda Bose, Vaibhav I. Parel and Akhil Katyal  Part III: Gendered Citizenships in Transnational Times  14. Policing Transgression, Disciplining Taslima: State Censorship in Postcolonial Bangladesh by Manmay Zafar 15.  Bread, Blood, and Bones: Democratic Socialism and Jamaican Drama by Kanika Batra 16. ‘Between Two Worlds’: A Narrative of the Split Self by Kay Souter 17. National Mythologies and Secret Histories: Faultlines in the Bark Hut in Some Recent Australian Fiction by Carol Merli 18. Bibliography 19. Index

Sumanyu Satpathy, currently Professor at the Department of English, University of Delhi, has taught at colleges and universities in India’s Eastern and North Eastern states such as Orissa, Mizoram and Meghalaya. He was Distinguished Fellow at the John Osborne Centre, Institute for Advanced Study, University of La Trobe, 2007 and a British Council Visitor, 1988. His publications include Re-viewing Reviewing: The Reception of Modernist Poetry in the Times Literary Supplement (1902-1932) (1995) and a critical edition of Joseph Conrad’s Heart of Darkness (2002). He has also contributed notes and essays on Yeats, Eliot and Pound in journals such as Notes & Queries, Papers in Language and Literature, English Language Notes, and Ariel. He has co-edited The Tenth Rasa: An Anthology of Indian Nonsense (2007); and Signifying the Self: Women and Literature (2004). He also translates from Oriya, Bangla and Hindi into English.

Southern Postcolonialisms: The Global South and the 'New' Literary Representations