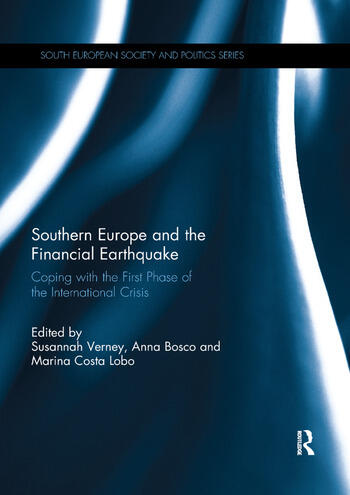 Southern Europe and the Financial Earthquake: Coping with the First Phase of the International Crisis

Following the outbreak of the international financial crisis, Southern Europe became an epicentre of economic instability and international concern. The prospect of a sovereign debt default in the eurozone’s ‘flaky fringe’ sent shock waves through the European and global economies. Examining the crucial initial phase, when the financial crisis was just beginning to spill over into the real economy, the volume surveys the impact of the September 2008 Lehman Brothers’ collapse across the EU’s southern periphery. The six South European eurozone members – Italy, Greece, Spain, Portugal, Cyprus and Malta – are viewed in comparative perspective with EU candidate state and non-eurozone member, Turkey. In an era before the spectacular EU/IMF bailouts, the picture that emerges is one of national differentiation, illuminating these countries’ different starting points and varying policy responses in the face of the gathering financial storm.

This book was published in 2009 as a special issue of South European Society and Politics.

2. The Response to the Global Financial Turmoil in Italy: ‘A Financial System that Does Not Speak English’  Lucia Quaglia

3. After the Fiesta: The Spanish Economy Meets the Global Financial Crisis  Sebastián Royo

4. The Return of the Greek Patient: Greece and the 2008 Global Financial Crisis  George Pagoulatos and Christos Triantopoulos

5. Back to External Pressure: Policy Responses to the Financial Crisis in Portugal  Francisco Torres

6. Wobbling but Still on its Feet: The Turkish Economy in the Global Financial Crisis  Caner Bakir

7. Cyprus in the Global Financial Crisis: How Lack of Banking Sophistication Proved an Advantage  Mustafa Besim and Fiona Mullen

Southern Europe and the Financial Earthquake: Coping with the First Phase of the International Crisis