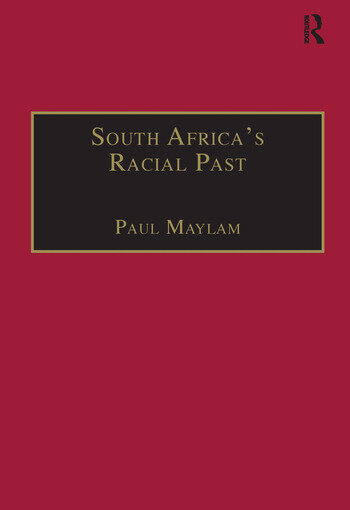 South Africa's Racial Past: The History and Historiography of Racism, Segregation, and Apartheid

A unique overview of the whole 350-year history of South Africa’s racial order, from the mid-seventeenth century to the apartheid era. Maylam periodizes this racial order, drawing out its main phases and highlighting the significant turning points. He also analyzes the dynamics of South African white racism, exploring the key forces and factors that brought about and perpetuated oppressive, discriminatory policies, practices, structures, laws and attitudes. There is also a strong historiographical dimension to the study. It shows how various writers have, from different perspectives, attempted to explain the South African racial order and draws out the political and ideological agendas that lay beneath these diverse interpretations. Essential reading for all those interested in the past, present and future of South Africa, this book also has implications for the wider study of race, racism and social and political ethnic relations.

’Paul Maylam is well-known for his survey of the history of (black) African people in South Africa. Now he has produced another bold, clearly-written and stimulating survey, this time on the role of race in South African history, from the beginnings of European colonisation in the 1650s to the end of white rule in the 1990s...there is no clearer discussion anywhere of the issues he deals with. Maylam’s book is always stimulating and deserves a wide readership.’ H-Net Reviews ’With his usual precision, Paul Maylum has published a useful overview of the race discrimination factor in the new history of South Africa. This can serve as an excellent lead-in for closer study of the subject.’ INDABA ’Paul Maylam’s text provides a concise historiographically informed account of South Africa's past from the beginnings of European colonization to the end of the apartheid regime...much of it is likely to be useful for an undergraduate or graduate student new to the field...’ Journal of African History ’Maylam is the first to trace race and racism through South African history...[his] book deserves a wide readership.’South African Historical Journal ’...provides a subtle analysis of the variety of South African history. It is a significant work for anyone who has ever tried to write history and found oneself entangled in the web of competing ideologies. It is also a very enlightening book...’ International Journal of African Historical Studies ’Even though race has dominated much of the intellectual ground in South Africa, there has not been a work of synthesis which has sought to guide the debate...Paul Maylam...has plugged this gaping hole in South African historiography and one should be grateful to him, for he has produced a clear and uncluttered history of racism in South Africa from pre-industrial times to the apartheid era...Maylam neatly weaves through the vast and complex literature on race in this compact and attractive study.’ Hist

South Africa's Racial Past: The History and Historiography of Racism, Segregation, and Apartheid