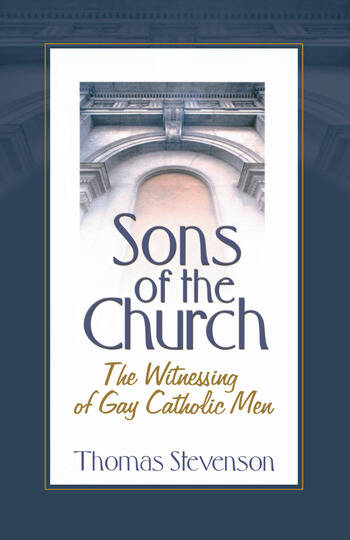 Sons of the Church: The Witnessing of Gay Catholic Men

Sons of the Church: The Witnessing of Gay Catholic Men spotlights testimonials from over thirty gay Catholic men to answer the question, “How can you be gay and Catholic?” Dr. Thomas B. Stevenson, who received degrees from the University of Notre Dame, Boston College, and the Graduate Theological Union in Berkeley, explores this question, using various interviews to thoroughly analyze the many dimensions of being gay and Catholic while providing a powerful and convincing criticism of Church teaching on homosexuality. This thoughtful, surprisingly reverent book is the answer for those gay readers who long for a religious connection, as well as for Catholic readers and those in pastoral positions who want and need to hear the stories of gay people firsthand.

Sons of the Church: The Witnessing of Gay Catholic Men tells one story—the story of what it is like to be gay and Catholic—through the various stories of over thirty gay Catholic men. Each chapter is arranged thematically, beginning with experiences of being homosexual and Catholic during childhood and youth. Subsequent chapters delve into the ways these men each finally accepted themselves and integrated their sexuality, related to others who did or did not understand, dealt with homosexual promiscuity, found intimate relationships, became a part of a community, and ultimately came to terms with the Catholic Church and their faith. Throughout, these ’witnesses’ explain how their faith in God guides them through the various experiences and issues they face. The positive aspects of Catholic Christianity are respectfully explored at the same time as the present Church teaching on homosexuality is challenged.

Sons of the Church uses interviews to explore:
Sons of the Church: The Witnessing of Gay Catholic Men is enlightening reading essential for educators, students, counselors, priests, nuns, psychologists, and theologians. Catholic people, gay people, and every educated reader will find that the interviews and ideas here stimulate thought and create a greater understanding of the issue of homosexuality and faith.

3. The Acceptance and Integration of Homosexuality

6. The Absolutization of Gayness

7. How Can You Be Gay and Catholic?

Sons of the Church: The Witnessing of Gay Catholic Men