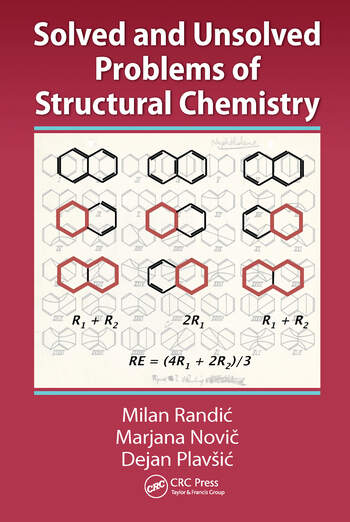 Solved and Unsolved Problems of Structural Chemistry introduces new methods and approaches for solving problems related to molecular structure. It includes numerous subjects such as aromaticity—one of the central themes of chemistry—and topics from bioinformatics such as graphical and numerical characterization of DNA, proteins, and proteomes. It also outlines the construction of novel tools using techniques from discrete mathematics, particularly graph theory, which allowed problems to be solved that many had considered unsolvable.

The book discusses a number of important problems in chemistry that have not been fully understood or fully appreciated, such as the notion of aromaticity and conjugated circuits, the generalized Hückel 4n + 2 Rule, and the nature of quantitative structure–property–activity relationships (QSARs), which have resulted in only partially solved problems and approximated solutions that are inadequate. It also describes advantages of mathematical descriptors in QSAR, including their use in screening combinatorial libraries to search for structures with high similarity to the target compounds.

Selected problems that this book addresses include:

collects results that were once scattered in scientific literature into a thoughtful and compact volume. It sheds light on numerous problems in chemistry, including ones that appeared to have been solved but were actually only partially solved. Most importantly, it shows more complete solutions as well as methods and approaches that can lead to actualization of further solutions to problems in chemistry.

Graph Theory and Chemistry
Unfamiliarity with Graph Theory
On HMO, the Hückel Molecular Orbital Theory
The Story of Isospectral Graphs
The Difference in HMO and PPP Bond Orders
Graphene Edge
References and Notes

Structure–Activity
Two Cultures
Qualitative Regression Analysis
QSAR versus "QSAR"
On Quantitative Characterization of Molecular Structure
The Criticism That Is Not
Highly Collinear Descriptors: The Problem That Is Not
The Single Equation Fallacy
References and Notes

Appendix 3: Letter Relating to the Calculation of the Symmetry of a Graph

Appendix 4: On Detection of the Illegal Deck of Cards for Graph Reconstruction

Appendix 6: The First Page of the Book of Euclid

Appendix 10: The Eigenvalues and Eigenvectors of Hexatriene

Appendix 17: An Input and Output of the Program VESPA

Appendix 18: List of Problems of Structural Chemistry Presented in This Book

Appendix 19: Rigorous Definitions and Descriptions of a Selection of Mathematical Concepts of Discrete Mathematics

Milan Randic earned his PhD from the University of Cambridge, England. He founded the Theoretical Chemistry group at the Institute Rudjer Boškovic in Zagreb, Croatia, in 1960. He joined the department of chemistry at the University of Zagreb in 1965 before leaving for the United States. He later joined the department of mathematics and computer science at Drake University, Des Moines, Iowa, until his retirement in 1999 as a distinguished professor. He has won several awards and pays annual visits to the Laboratory of Chemometrics, National Institute of Chemistry, Ljubljana, Slovenia. He is a member of the Croatian Academy of Sciences and Arts, an honorary member of the Slovenian Chemical Society, and an honorary member of the National Institute of Chemistry in Ljubljana, from which he received the Grand Pregel Award in 2010. In 2014 he reported the exact solution of the protein alignment problem, which had existed for 45 years.

is head of the Laboratory of Chemometrics at the National Institute of Chemistry, Ljubljana, Slovenia, and teaches chemometrics at the University of Ljubljana, where she earned her PhD from the Faculty of Chemistry and Chemical Technology in 1985. She started her career at the National Institute of Chemistry in Ljubljana, initially developing automated information systems for infrared and NMR spectroscopy. Her expertise includes the development of chemometrics methods, QSAR and ANN modeling, structural elucidation of transmembrane segments of membrane proteins, and innovative merging of chemometrics methods with molecular modeling, which facilitates effective drug design.

is a senior research scientist at the NMR Center at the Rudjer Boškovic Institute, Zagreb, Croatia. He earned his PhD in chemistry from the University of Zagreb. His research interests are in mathematical chemistry, chemical graph theory and its applications, metal clusters, organometallic compounds, and catalysis. Since 2003 he has been interested in extending graphical and numerical characterizations to DNA, proteins, and proteome maps using graph theoretical tools, entering thus into bioinformatics. Two of his papers in this area have received recognition as being among the 50 Most Cited Papers in Chemical Physics Letters during the 2003–2007 period. He is also one of the initial founding members of the International Academy of Mathematical Chemistry. In 2006 he was the first recipient of the International Award Latium between Europe and the Mediterranean for Medicine, Physics, or Chemistry.

"Already in the Preface (on page XIII) the authors declare that their book is 'unusual and unconventional'. Indeed it is! Contrary to many other existing monographs concerned with chemical graph theory or its selected special topics, this book is full of interesting, unusual, and surprising excursions, making its reading a great pleasure. Everywhere in the book, we find historical details and anecdotes, related to physics, chemistry, physical chemistry, and mathematics, often coming from Milan Randic's personal experience. Colleagues interested in philosophy of science (or philosophy in general) will also find a wealth of intriguing ideas. For these colleagues we especially recommend Chapter 14, and its sections 'On Beauty in Science' and 'Sleeping Giants'. The same chapter will be a gold mine for scholars interested in the history of chemistry . . .
In summary, 'Solved and Unsolved Problems of Structural Chemistry' is a valuable treatise, outlining practically all facets of the research of Milan Randic in various areas of chemical graph theory. ... this book should be a valuable item in the personal library of all those who ever did any work or ever had any interest in chemical graph theory."
– Ivan Gutman, Match: Communications in Mathematical and in Computer Chemistry, 2016.

"Along 14 chapters and a large number of appendices (23!),the volume quite well printed by CRC Press essentially develops the problems related with the connection of graph theory with molecular structure and chemistry. [...] The book is interesting enough to be worth reading and alternatively constitutes quite an important consulting tool."