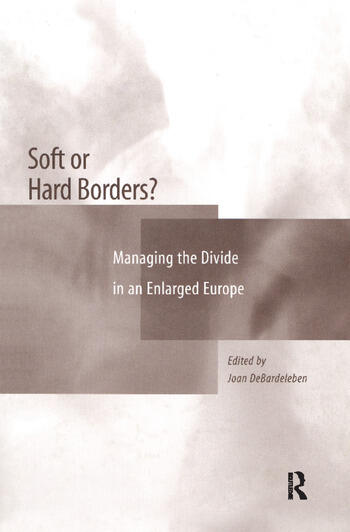 Soft or Hard Borders?: Managing the Divide in an Enlarged Europe

Bringing together leading European and North American experts, this timely volume answers questions about the implications and management of the new external borders of the European Union following another phase of enlargement. Implications of the EU's new external border, especially its eastern border with Russia and Ukraine, will be a key issue for the new member countries, for the EU, and for the new neighbouring regions. The contributors address this emerging question from two perspectives. They examine whether an expanded Europe will create a new dividing line in Europe between 'insiders' and 'outsiders', and also consider the concrete problems of border management and how the issues will be handled. The book will be of particular value to those concerned with European politics and the expansion of Europe, and to those with an interest in political sociology.

Joan DeBardeleben is Professor at the Institute of European and Russian Studies, and Director for the Centre for European Studies at Carleton University, Canada.

'...one of the first books on borders that examines both the internal and external borders in the post-Eastern enlargement period. The book is innovative in elaborating on the concept of borders in the enlarged European Union (EU). Furthermore it examines the positions of the EU vis-Ã -vis its new neighbours and examines the salient issues that the EU faces now that its borders have extended into new territory. Written by world-class scholars, this book is a must read for anyone with an interest in the past, present and future of the European Union.' Amy Verdun, University of Victoria, Canada 'An excellent collection of papers that address a critical issue in contemporary European politics. This book considers the changing nature as well as location of the Eastern borders of the European Union and advances our understanding of EU enlargement, border control in the new Europe, and relations within the EU's new neighbourhood.' David Long, Carleton University, Canada 'The book succinctly puts forth the complexities of border management in the post-enlargement era in Europe...The contributors offer interesting and insightful propositions.' USI Journal 'Soft or Hard Borders? makes an important contribution...highly recommended for those interested in the European Union, EU integration policies, and European security issues more generally.' The European Legacy 'It is indeed too early to tell how the European Union will tackle the issues of border management, but the relevance of this book is that it anticipates a number of future challenges for the EU and its eastern neighbours.' Political Studies Review 'This book...reveals the intricate and winding paths new EU members follow as their borders"soften" between other EU states, as well as the inpediments non-EU members face from perennial "hardened" borders.' Slavic Review '...a timely collection of papers...this is a welcome addition to the literature, notable for the consistent quality of the chapters andâ

Soft or Hard Borders?: Managing the Divide in an Enlarged Europe