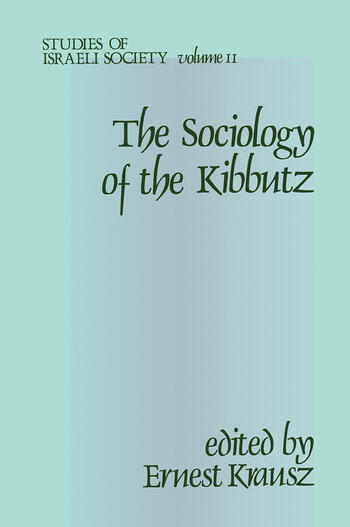 Sociology of the Kibbutz

This is the second volume of the publication series of the Israeli Sociological Society, whose object is to identify and clarify the major themes that occupy social research in Israel today. Studies of Israeli Society gathers together the best of Israeli social science investigation, which was previously scattered in a large variety of international jour-nals. Each book in the series is in-troduced by integrative essays.

The contents of volume two focus on the sociology of a unique Israeli social institution—the kibbutz. Kib-butz society constitutes an impor-tant laboratory for the investigation of a variety of problems that have been of perennial concern to the social sciences. Topics in this volume include relevant contem-porary issues such as the dynamics of social stratification in a "classless" society, the function and status of the family in a revolutionary society, relations between generations, industrializa-tion in advanced rural communities, and collective economies versus the outside world. The questions of the concept and development of the kib-butz, social differentiation and socialization, and work and produc-tion within the kibbutz possess a significance far beyond their im-mediate social context. Does the kibbutz offer a model for an alter-native, communal lifestyle for the modern world? How has the kibbutz changed over the past decadeswithin the context of a rapidly modernizing Israeli society?

Emphasizing the "nonfailure" of the kibbutz experiment and con-trasting it with many socialist, cooperative, and communal ex-periments that clearly did fail, Martin Buber, in his analysis, attributes this success to the kib-but/'s undogmatic character, its ability to adapt structures and in-stitutions to changing conditions, while preserving its essential values and ideals.

This volume presents an excellent review of the social research under-taken on the kibbutz in the past decades, and provides an introduc-tion to the growing scientific literature on the kibbutz.

Sociology of the Kibbutz