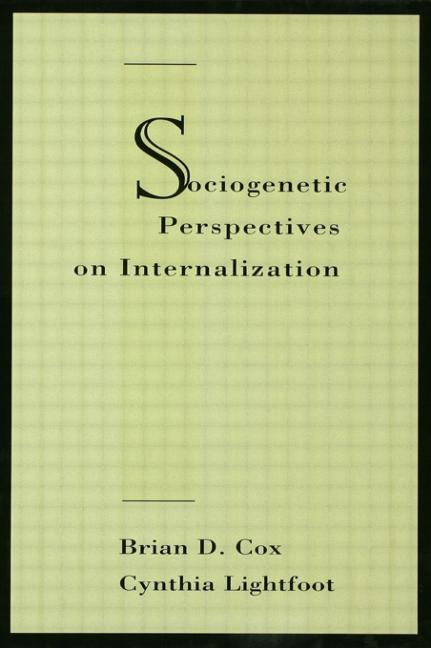 The issue of how the external world becomes part of the behavioral repertoire of children has been important to psychology from its very beginning, preoccupying theorists from Sigmund Freud to George Herbert Mead. But ever since Lev Vygotsky claimed that every function in a child's activity appears first as a process in the social realm between individuals and moves to a process that individual children can accomplish relatively independently, there has been increased debate as to exactly how this process of internalization happens. In contemporary developmental psychology, the process of internalization has become so important that the time is ripe for a book which explicitly addresses the problems it poses. Although the chapters in this book deal with age groups from preschool to adolescence, and topics from mathematics to storytelling and from taking risks to making moral judgments, there is one core question which unifies them all: If the growing competence of a child is truly sociogenetic, if it truly grows out from, is supported by, and is dependent upon the social, where is that competence truly located? Bearing a variety of labels--cultural-historical, co-constructionist, dialectical, contextualist, narrative, hermeneutic, and discursive psychologies--and analytic constructs--scaffolding, proleptic instruction, participation, appropriation, and situated activity--contemporary perspectives are showing clear signs of development and differentiation. This volume's goal is to help bring some order to these differences, without denying either the usefulness of this variety or the importance of the differences among perspectives.

This new book illuminates these differences by collecting a select sample of theory and research into one of two major sections. The first section includes work undertaken from a social interactive perspective. The overarching aim is to identify processes of child-child or child-adult interactions as they emerge over relatively short periods of time. Typically, the methodology involves the microanalysis of videotaped interactions. Development is situated literally within social interactions which are considered directly responsible for children's development. The second section provides a sample of work representing a symbolic action perspective. This one is not oriented toward social interactions but toward the symbolic meanings that they express and that children impose on them. The dominant methodology is interpretive or hermeneutic, and the goal is to articulate the figurative (metaphoric) processes and narrative structures that inhabit social actions and from which they draw their meaning and coherence.

Contents: Preface. C. Lightfoot, B.D. Cox, Locating Competence: The Sociogenesis of Mind and the Problem of Internalization. Part I: Mind as Internalized Social Interaction. L.T. Winegar, Can Internalization Be More Than a Magical Phrase? Notes Toward the Constructive Negotiation of This Process. J. Lawrence, V. Heinze, Everyone Does It, but Who's to Blame: Adolescents' Constructions and Reconstructions of Shoplifting. B.D. Cox, Mathematics Instruction and Metamemory: Examples of Too Much and Too Little Social Intervention in the Process of Invention. Z. de Moraes Ramos de Oliveira, The Concept of Role and the Discussion of the Internalization Process. J. Tudge, Internalization, Externalization, and Joint-Carving: Commenting From an Ecological Perspective. Part II: Mind as Internalized Symbolic Action. C. Lightfoot, The Clarity of Perspective: Adolescent Risk Taking, Fantasy, and the Internalization of Cultural Identity. A. Nicolopoulou, Worldmaking and Identity Formation in Children's Narrative Play-Acting. M. Boyes, R. Giordano, M. Pool, Internalization of Social Discourse: A Vygotskian Account of the Development of Young Children's Theories of Mind. M. Varelas, J. Becker, Internalization of Cultural Forms of Behavior: Semiotic Aspects of Intellectual Development. M.B. Tappan, Internalization and Its Discontents. Part III: Critical Overview. J. Valsiner, Magical Phrases, Human Development, and Psychological Ontology.

"Brian Cox and Cynthia Lightfoot have done a highly creditable job in making sure that those who missed the SRCD presentation in 1993(?) now have available a first-rate collection."
—British Journal of Developmental Psychology

"The discovery of Vygotsky's work rates amongst the most significant developments in psychology in the second half of the 20th century. However, the insight that persons as psychological beings are socially created can be taken in more than one way. In this collection of studies, the growing independence of the individual from its sociogenetic environment through Vygotsky's zone of proximal development is highlighted as 'internalization'. The division of the collection into reports of work on how symbolic acts are internalized has allowed the authors to cover a great deal of ground from basic structures of moral intuitions to the conceptual foundations of adolescent ways of life.

The book is timely indeed, presenting solid empirical work tracing the growth of competence through detailed analysis of the activities in the zone of proximal development to complement what until recently has been a predominantly theoretical literature. The breadth of the work described here illustrates the extraordinary range of possibilities opened up by the sociogenetic approach. It is also important as a corrective to what I believe has been an unwise deletion of a robust sense of personal identity from the foundations of psychology.

There continue to be tensions within the generally Vygotskian way of looking at development, and a great virtue of this book is the editors' willingness to confront and resolve some of them. Personal agency and activity cannot give way to a wholly socially driven account of action. In the end, there is no favored directionality in person-culture relations because each is a dynamically shaped product of the other. I am confident that this collection will have a powerfully stimulating effect on developmental studies because it not only brings to light the creative tensions that are to be seen in the approach, but demonstrates the illuminating qualities of the insights that can be drawn from it."

"Lightfoot and Cox have put together a volume on one of the most important issues in the human sciences today, and they have done so by including some of the best minds on the topic. The authors in this volume have made a particularly important contribution by clarifying the notion of internalization from various sociogenetic perspectives. I do not think we will have any final answers to our questions about internalization in the near future, but I do think that this volume will frame the next round of debate in an important and productive way."
—James V. Wertsch
Washington University, St. Louis