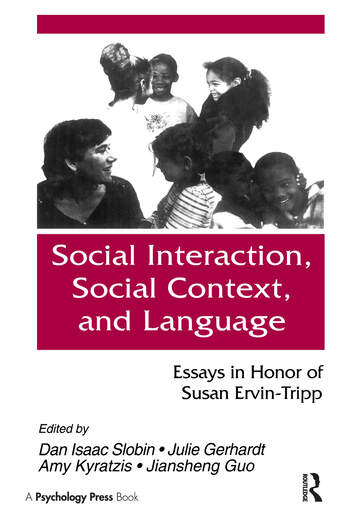 This collection of essays is a representative sample of the current research and researchers in the fields of language and social interactions and social context. The opening chapter, entitled "Context in Language," is written by Susan Ervin-Tripp, whose diverse and innovative research inspired the editors to dedicate this book to her honor. Ervin-Tripp is known for her work in the fields of linguistics, psychology, child development, sociology, anthropology, rhetoric, and women's studies. She has played a central role in the definition and establishment of psycholinguistics, child language development, and sociolinguistics, and has been an innovator in terms of approaches and methods of study.

This book covers a wide range of research interests in the field, from linguistically oriented approaches to social and ethnography oriented approaches. The issue of the relationships between forms and structures of language and social interactions is examined in studies of both adult and child speech. It is a useful anthology for graduate students studying language and social interaction, as well as for researchers in this field.