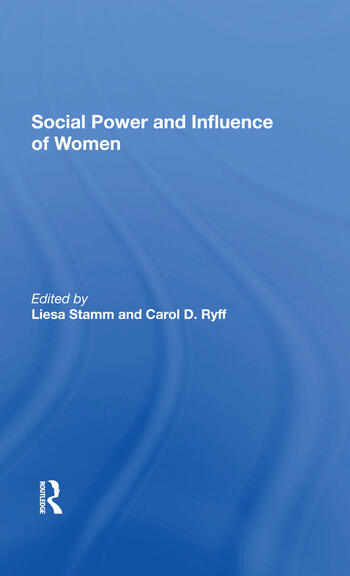 Social Power And Influence Of Women

Using a variety of methodological and theoretical perspectives, the authors of this collection discuss women's power within the various sociocultural contexts in which women operate—such as the workplace, the family, and other interpersonal relationships—and the differential nature of women's power and influence over their life course. Personality characteristics associated with mastery and influence are examined, as are the limitations imposed by societal norms and expectations. Finally, the authors discuss the development of theories about women's power and suggest ways in which women's roles—and consequently, women's influence—are changing as new societal values evolve.

"Liesa Stamm is a planner and director of evaluations at the Community Council of the Capitol Region in Hartford, Connecticut. She also works with the Women's Research Institute at Hartford College for Women. A specialist in sociocultural anthropology, she has written on women's roles in cross-cultural perspective, gender roles in North Africa and the Middle East, women's power, and age–roles and life course effects.

Social Power And Influence Of Women