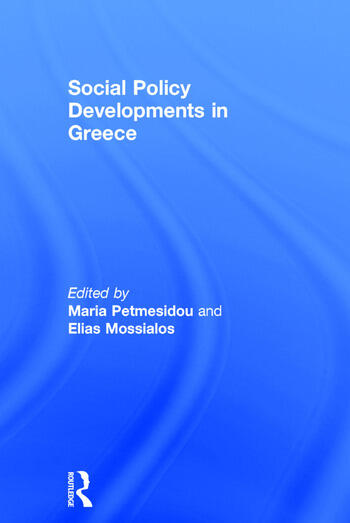 In recent years there has been much debate surrounding the future of the welfare state in Europe, the complex factors influencing reform, and the extent to which responses to pressures on welfare could lead to irreversible systemic changes in social policy. By providing an in-depth analysis of social policy developments in Greece, this work furthers understanding of welfare reform trajectories in Europe. The authors thoroughly examine aspects of structural change, challenges and responses in major policy areas of employment, social security, family and gender, health and social care, and migration. Research issues central to the debate on 'recasting European welfare states', such as structural adjustments with regard to the production, organization and delivery of welfare, significant changes in the financial side of social protection, the role of political parties, the social partners and other major social actors in influencing (or resisting) policy reform, are at the forefront of the contributions to this volume. The scope and intensity of pressures on the Greek welfare state emanating from the supranational level and the challenges linked to European integration and economic and monetary union are also of crucial importance in the analyses undertaken.

Maria Petmesidou is Professor of Social Policy at Democritus University of Thrace in Greece. She is also Vice-Chair of CROP (Comparative Research on Poverty) of the International Social Science Council. Elias Mossialos is Brian Abel-Smith Professor of Health Policy and co-Director of LSE Health and Social Care at the London School of Economics and Political Science, UK.

’This excellent book fills a gap in the existing literature and should be essential reading for all those interested in welfare state reforms, southern European politics and society and the broader process of social policy Europeanization�.’ Maurizio Ferrera, University of Milan, Italy ’This is the first major and systematic analysis of social policy in Greece. It demands a wide readership, particularly as it tackles some crucial issues of institutional rigidity that have received too little attention during European efforts to modernise social policies. The book critically highlights "pre-modern" social forms typical of south-east European countries (including Turkey)...as the EU looks to the long-term challenge of absorbing these countries, and enabling their move into the European mainstream, policy-makers and academics would do well to pause and first read this book.’ Graham Room, University of Bath, UK ’...offers a systematic and comprehensive analysis of the system of social policy in Greece, in the English language, and fills an important gap in the literature on this particular issue.’ South-Eastern Europe Journal of Economics