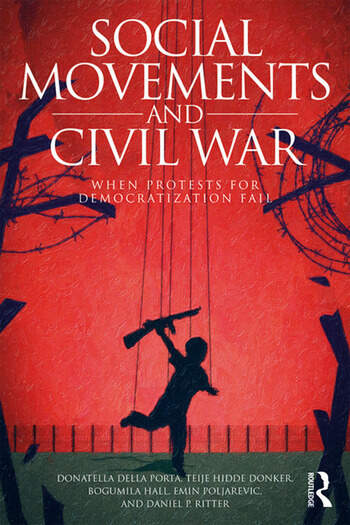 Social Movements and Civil War: When Protests for Democratization Fail

This book investigates the origins of civil wars which emerge from failed attempts at democratization.

The main aim of this volume is to develop a theoretical explanation of the conditions under which and the mechanisms through which social movements’ struggles for democracy end up in civil war. While the empirical evidence suggests that this is not a rare phenomenon, the literatures on social movements, democratization and civil wars have grown apart from each other. At the theoretical level, Social Movements and Civil War bridges insights in the three fields, looking in particular at explanations of the radicalization of social movements, the failure of democratization processes and the onset of civil war. In doing this, it builds upon the relational approach developed in contentious politics with the aim of singling out robust causal mechanisms. At the empirical level, the research provides in-depth descriptions of four cases of trajectory from social movements for democratization into civil wars: in Syria, Libya, Yemen and the former Yugoslavia. Conditions such as the double weakness of civil society and the state, the presence of entrepreneurs of violence as well as normative and material resources for violence, ethnic and tribal divisions, domestic and international military interventions are considered as influencing the chains of actors’ choices rather than as structural determinants.

This book will be of great interest to students of civil wars, political violence, social movements, democratization, and IR in general.

4. The failure of Libyan political transition and the descent into civil war, Emin Poljarevic

5. Yemen’s failed transition: From peaceful protests to war of ‘all against all’, Bogumila Hall

Donatella della Porta is Professor of Political Science and Dean of the Institute for Humanities and the Social Sciences at the Scuola Normale Superiore, Florence, Italy.

is a postdoctoral researcher in the Department of Comparative Politics at the University of Bergen, Norway.

has a PhD in Sociology from the European University Institute, Florence, Italy.

is a PDRA Research Fellow at Qatar University.

is Assistant Professor of Sociology at Stockholm University, Sweden.

Social Movements and Civil War: When Protests for Democratization Fail