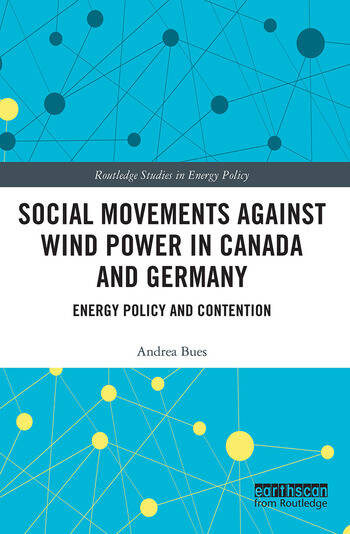 Social Movements against Wind Power in Canada and Germany: Energy Policy and Contention

Taking a comparative case study approach between Canada and Germany, this book investigates the contrasting response of governments to anti-wind movements.

Environmental social movements have been critical players for encouraging the shift towards increased use of renewable energy. However, social movements mobilizing against the installation of wind turbines have now become a major obstacle to their increased deployment. Andrea Bues draws on a cross-Atlantic comparative analysis to investigate the different contexts of contentious energy policy. Focusing on two sub-national forerunner regions in installed wind power capacity- Brandenburg and Ontario- Bues draws on social movement theory to explore the concept of discursive energy space and propose explanations as to why governments respond differently to social movements. Overall, Social Movements against Wind Power in Canada and Germany offers a novel conceptualization of discursive-institutional contexts of contentious energy politics and helps better understand protest against renewable energy policy.

This book will be of great interest to students and scholars of renewable energy policy, sustainability and climate change politics, social movement studies and environmental sociology.

3. Renewable Energy Policy and Politics in Canada and Germany

7. Conclusion: The Changing Winds of Discourses on Decarbonization

Andrea Bues is a research analyst at the German Advisory Council on the Environment, based at the Potsdam-Institute for Climate Impact Research. She holds a PhD in political science from Freie Universität Berlin and has been working on land use conflicts and energy transitions.

An essential guide to understanding the role of discursive and institutional factors in the genesis of anti-wind power movements in Germany and Canada that draws clear lessons for those who want to accelerate the transition to low carbon energy.

Both Canada and Germany are facing opposition to the building of large-scale renewable energy systems yet with different force and impact. Examining how "discursive energy spaces" can influence the development of renewable energy conflicts, this fascinating book explains why anti-wind park movements in Germany have been less successful than in Canada. The book’s findings have implications for energy transitions taking place around the world, making it a valuable resource for academics, students, and practitioners alike.

A useful conceptualization of the effects of context on power relations and the practical implications for the study of contentious politics.

Wind energy is vital for decarbonising electricity. This book offers a highly valuable cross-national comparison of how social movements mobilize against it. The end goal of such analysis is not to abandon or reject wind energy, but to make it more equitable. The book offers insightful analysis of how context matters for achieving a fairer low-carbon future.

Benjamin K. Sovacool, Professor of Energy Policy at Sussex University, UK, and author of Visions of Energy Futures and Energy Security, Equality and Justice (both published by Routledge)

Social Movements against Wind Power in Canada and Germany: Energy Policy and Contention