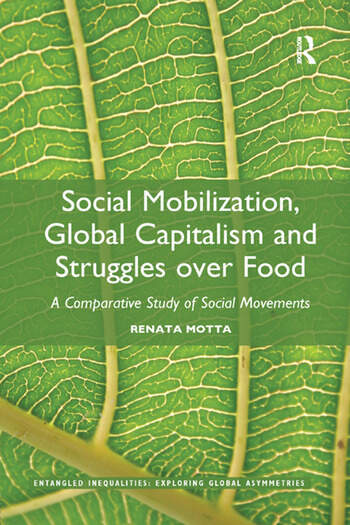 This book explores the transformation of Brazil and Argentina into two of the world’s largest producers of genetically modified (GM) crops. Systematically comparing their stories in order to explain their paths, differences, ruptures and changes, the author reveals that the emergence of the two nations as leading producers of GM crops cannot be explained by technological superiority of biotechnology; rather, their trajectories are the results of political struggles surrounding agrarian development, in which social movements and the rural poor contested the advancement of biotechnologically-based agrarian models, but have been silenced, ignored, or demobilized by a network of actors in favour of GM crops. Based on rich interview and media material collected amongst activists, the author highlights the importance of political struggles over GM crops not only to debates on agrarian futures and food security, but also as illustrations of the challenges faced by contemporary democracies. An international comparative study, this book raises the question of how social mobilization and rights claims can counter the systemic imperatives of global capitalism and political interests, at a time when regional governments are reliant on commodity booms, whilst globally, governments are obliged to introduce programmes of austerity. As such it will appeal to scholars of sociology, political science and geography with interests in social movements, development, globalization, inequality and political economy.

1. Theorizing and research disputes over GMOs;

5. Many tales of GMOs: a comparison

Renata Motta is Assistant Professor of Sociology at the Institute for Latin American Studies at the Freie UniversitÃ¤t Berlin, Germany.

'Motta’s book offers a comparatively nuanced analysis of the construction of ‘bio-hegemony’ in Argentina and Brazil, as GM crops are instituted. These case studies establish the fundamental importance of countermovement alliances as democratic registers, especially in politicizing hegemonic claims of the superiority of transgenic technology, and they offer a rich primer on the ecology of social and political contention.' - Philip McMichael, Cornell University, USA and author of Food Regimes and Agrarian Questions (2013)

'Biotechnology does not rule by itself. As this book shows, social and political struggles and confrontations at the local, national, and global level are involved in the introduction and expansion of genetically modified crops in Brazil and Argentina. The dense and rich analysis of social movements and actors presented will become a model for the analysis of movements that challenge global capitalist developments.' - Elizabeth Jelin, Senior Researcher CIS CONICET-IDES, Buenos Aires.

‘Social Mobilization, Global Capitalism, and Struggles over Food: A Comparative Study of Social Movements should be read by anyone interested in the relationship between social movements and agrarian capitalism, and it is mandatory reading for anyone interested in understanding how GM crops came to dominate South American plains.’ - Pablo Lapegna, University of Georgia, European Review of Latin American and Caribbean Studies