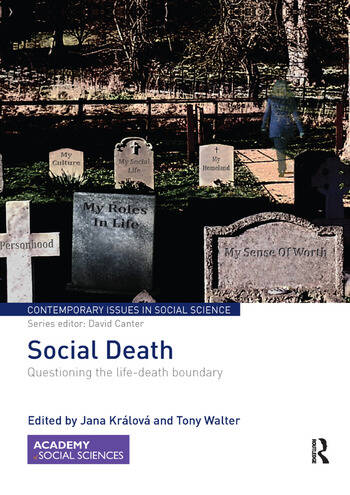 Social death occurs when the social existence of a person or group ceases. With an individual, it can occur before or after physical death. Scholars in a wide range of disciplines have applied the concept to very diverse issues – including genocide, slavery, dementia, hospitalisation, and bereavement. Social death relates to social exclusion, social capital, social networks, social roles and social identity, but its theorising is not united – scholars in one field are often unaware of its use in other fields.

This is the first book to bring a range of perspectives together in a pioneering effort to bring to the field conceptual clarity rooted in empirical data. Preceded by an original theoretical discussion of the concept of social death, contributions from the UK, Romania, Sweden, and Israel analyse the fourth age, end of life policies, dying alone at home, suicide, photographs on gravestones, bereavement, and the agency of dead musicians. This book was originally published as a special issue of Contemporary Social Science.

1. What is social death? Jana Králová

2. Agency in the context of social death: dying alone at home Glenys Caswell and Mórna O’Connor

3. Social death and the moral identity of the fourth age Chris Gilleard and Paul Higgs

6. To resist or to embrace social death? Photographs of couples on Romanian gravestones Adela Toplean

7. (Social) Death is not the end: resisting social exclusion due to suicide Zohar Gazit

Jana Králová trained in social work in the Czech Republic and is currently completing a sociology Ph.D. on social death at the Centre for Death and Society, Department of Social and Policy Sciences, University of Bath, UK.

is Honorary Professor of Death Studies at the University of Bath, UK. A sociologist, he has written widely on death in society.