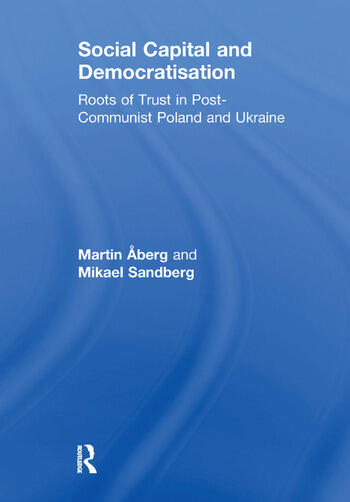 Social Capital and Democratisation: Roots of Trust in Post-Communist Poland and Ukraine

Contributing an impressive historical basis for path dependency analysis and the role of social capital in newly established democracies, this book offers a fascinating and ground-breaking analysis of the role of social capital in the democratic context of Eastern Europe. Focusing on Poland and Ukraine, this book fills the literature gaps for integrated empirical and theoretical research with respect to post-Communist democratization, social capital vs. democratization theory, and the case study area of Central and Eastern Europe. Suitable for students from graduate level upwards in Central and Eastern European studies, political theory and history.

'This book can be highly recommended to all those interested in understanding the deeper roots of the transformation process in Central and Eastern European countries. It is an excellent study of the interplay between the often neglected historical factors and contemporary political and economic developments. Additionally, its regional perspective reveals the previously unexplored complexity of the patches of development of social capital in the countries of the region.' Dr Tomasz Zarycki, Warsaw University, Poland 'This book represents a thought-provoking combination of original theoretical ideas, and a wealth of data on various aspects of the post-Communist political evolution in Poland and the Ukraine. Through an in-depth analysis of two cities, the authors are able to draw an unusually nuanced and multi-faceted picture of the democratization process.' Professor Christer JÃ¶nsson, Lund University, Sweden 'All historians of the region know that the fates of Poland and Ukraine have been closely tied over a millennium. Since 1991, for the first time in centuries, these two nations are living side by side as good neighbours and each in its own way is trying to build a post-Communist, democratic and pluralistic society. This is a remarkable study of two nations in their post-Communist eras - we need such works to allow a deeper understanding of a region well into its second decade on a new and uncharted path. This work is not only essential reading for social and political scientists, students of current affairs, and all those engaged in relations with Poland and Ukraine...it deserves to be read also by all those who want to get a deeper insight into two societies with so much of a common past and yet so very different.' Professor Roman Szporluk, Harvard University, USA 'The authors' in-depth analyses of trust at the local and national levels provide an important contribution to the existing literature on democratic consolidation, particularly for states where t

Social Capital and Democratisation: Roots of Trust in Post-Communist Poland and Ukraine