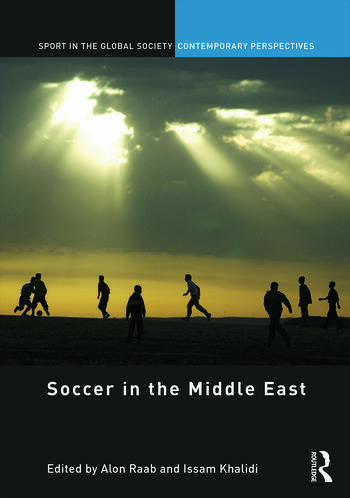 Soccer in the Middle East

This collection explores the multifaceted connections between soccer and society in the Middle East. It examines the social significance of soccer and its importance to individuals and the collectivity. Shaped and influenced by such forces as religion, colonialism, nation-building and globalization, the game is a source of both conflict and peace.

Soccer is a vital part of the Middle East’s cultural and political fabric. The chapters in this volume include an essay on the leading role played by fans and players during the Arab Spring revolts; anthropological studies of women players in Iraqi Kurdistan, obstacles faced and overcome; reports centered on the politics of Turkish fans; a survey of the political affiliations of Lebanese clubs; studies of pre-1948 Palestinian sport; and portrayals of Arab athletes in the Israeli media during the second Intifada and how they reflect shifting political realities and attitudes.

The themes of this book are addressed through individual accounts, sociological studies, philosophical speculations and selections culled from literature.

This collection offers fresh insights into the hope that soccer can provide, demonstrated recently by the successes of the Iraqi national team, suggesting possibilities of unity and solidarity in a fractured land. In the complex, dynamic and politically fraught societies of the Middle East, soccer captures the imagination and embodies the values and dreams of its followers in multiple configurations.

This book was originally published as a special issue of Soccer & Society.

1. Soccer in the Middle East: an introduction Alon Raab  2. Race, Place and Soccer: Egypt, Morocco and ‘African’ identity in the competition to host the 2010 FIFA World Cup Shaun T. Lopez  3. Playing for identity and independence: the issue of Palestinian statehood and the role of FIFA Glen M.E. Duerr  4. A new heart for Turkish soccer: a virtue ethics diagnosis and treatment Jesus Ilundáin-Agurruza and Cem Kuleli  5. The view from the stands: life among Istanbul’s soccer fanatics Elif Batuman  6. Reshaping the national bounds through fandom: the UltrAslan of Galatasaray Adrien Battini  7. Spring forward: female Muslim soccer players in Iraqi Kurdistan Geoff Harkness  8. A hobby or hobbling? Playing Palestinian women’s soccer in Israel Kenda R. Stewart  9. Coverage of sports news in Filastin, 1911–1948 Issam Khalidi  10. Peace building? The coverage of Arab football players in the Hebrew sports media during the October 2000 riots Chen Kertcher  11. Walls and goals: the Israeli–Palestinian encounter in football films and literature Alon Raab  12. Lebanon: a country torn apart on the soccer pitch James Montague  13. From Terso into Ultras: the 2011 Egyptian revolution and the radicalization of the soccer’s Ultra-Fans Shawki El-Zatmah  14. Syria James Montague  15. Selections from ‘Drumbeat’, by Montague El-Bisatie, Introduced by Alon Raab Mohamed El-Bisatie and Alon Raab  16. A selection from ‘Moon over Samarqand’, by Mohamed Mansi Qandil, Introduced by Alon Raab Mohamed Mansi Qandil and Alon Raab  17. A selection from ‘Life is more beautiful than paradise: a Jihadist’s own story’, by Khaled Al-Berry, Introduced by Alon Raab Khaled Al-Berry and Alon Raab  18. Diary entries written during the road to the 2006 Mundial – from the diary of Morad Fareed, Palestinian national team member Morad Fareed  19. Afterword Alon Raab

Alon Raab is co-editor of The Global Game: Writers on Soccer (2008) and teaches Religious Studies at UC Davis in California, USA. His classes include the Israeli-Palestinian Encounter Through Film and Literature and The History and Culture of Soccer. He has written journalistic and academic studies of the game and its culture.

Issam Khalidi, an independent scholar living in San Francisco, California, USA, is the author of History of Sports in Palestine 1900-1948 in Arabic, One Hundred Years of Football in Palestine in English and Arabic, as well as various articles on the subjects included at hpalestinesports.net.

Soccer in the Middle East