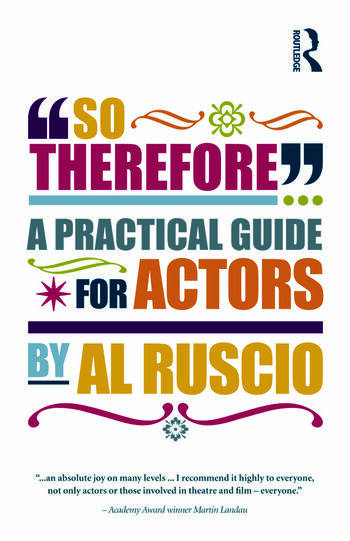 So Therefore...: A Practical Guide For Actors

‘Every scene or action or speech has a so therefore. It is the goal, the ultimate statement of the character. You should know the so therefore as you begin your scene ... The climax and the payoff is the so therefore.’ – from Al Ruscio’s Preface

When working through a scene with a student, renowned actor and acting teacher Al Ruscio will ask, ‘so therefore, what?’ to urge them to capture the specific actions and desires that define their character at that moment. So Therefore… interweaves tried-and-tested practical exercises with sound advice, and illustrative tales from Ruscio’s remarkable career, to form a training handbook as uniquely pragmatic as his favourite phrase. Breaking down his method into three broad focuses, Ruscio considers:

But So Therefore… also reflects wisely on such diverse subjects as Stage versus Film, and Stamina, Luck and Chutzpah. Enriching and generous, it is the culmination of a career that has taken in dozens of major motion pictures, and spans the entire history of television – as well as half a century spent training actors.

Al Ruscio graduated from the famed Neighborhood Playhouse School of the Theatre and has been teaching acting for five decades. He has served on the Board of Directors of the Screen Actors Guild and is a current voting member of the Academy of Motion Picture Arts and Sciences.

Preface "So Therefore" (a few words about my title) ix

Part One: Warming Up

Beneath the Words xx

The Spine of the Play xx

The Spine of the Character xx

Your Objective in the Scene xx

Actions in the Scene xx

The As If xx

The Spine of your Character xx

The Use of Improvisations xx

Detailed Work On Each Act xx

Opening Night and Beyond xx

Al Ruscio graduated from the famed Neighborhood Playhouse School of the Theatre and has been teaching acting for five decades. He has served on the Board of Directors of the Screen Actors Guild and is a current voting member of the Academy of Motion Picture Arts and Sciences.

So Therefore...: A Practical Guide For Actors