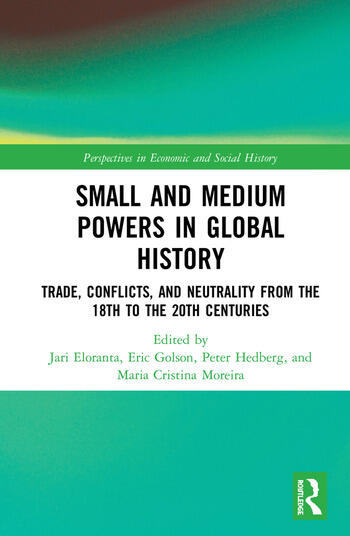 Small and Medium Powers in Global History: Trade, Conflicts, and Neutrality from the 18th to the 20th Centuries

This volume brings together a leading group of scholars to offer a new perspective on the history of conflicts and trade, focusing on the role of small and medium, or "weak", and often neutral states. Existing historiography has often downplayed the importance of such states in world trade, during armed conflicts, and as important agents in the expanding trade and global connections of the last 250 years. The country studies demonstrate that these states played a much bigger role in world and bilateral trade than has previously been assumed, and that this role was augmented by the emergence of truly global conflicts and total war.

In addition to careful country or comparative studies, this book provides new data on trade and shipping during wars and examines the impact of this trade on the individual states’ economies. It spans the period from the late 18th century to the First and Second World Wars and the Cold War of the 20th century, a crucial period of change in the concept and practice of neutrality and trade, as well as periods of transition in the nature and technology of warfare.

This book will be of great interest to scholars of economic history, comparative history, international relations, and political science.

List of contributors; Foreword PATRICK KARL O’BRIEN; 1 Introduction JARI ELORANTA, PETER HEDBERG, MARIA CRISTINA MOREIRA, AND ERIC GOLSON PART I Interplay of trade and conflicts in the long run 2 Trade and the new republic: American trade during the Napoleonic Wars, 1783–1830 JEREMY LAND, JARI ELORANTA, AND MARIA CRISTINA MOREIRA 3 The United States and the Mediterranean during the French Wars (1793–1815) SILVIA MARZAGALLI 4 Commercial relations between Portugal and Russia: neutrality, trade, and finance, (1770–1850) MARIA CRISTINA MOREIRA, RITA MARTINS DE SOUSA, AND WERNER SCHELTJENS 5 Taxation in Brazil in the Napoleonic Wars: neutrality, economy and the outcomes of a royal court in transit RODRIGO DA COSTA DOMINGUEZ AND ANGELO ALVES CARRARA 6 Wartime trade and tariffs in Sweden from the Napoleonic Wars to World War I PETER HEDBERG AND HENRIC HÄGGQVIST PART II Trade and neutrality in conflicts 7 Small states in harm’s way: neutrality in war ERIC GOLSON 8 The Atlantic orientation: Norway and the western blockade of Germany, 1914–1918 KNUT OLA NAASTAD STRØM 9 What was the impact of World War I on Swedish economic and business performance? A case study of the ball bearings manufacturer SKF ERIC GOLSON AND JASON LENNARD 10 The macroeconomic effects of neutrality: evidence from the Nordic countries during the wars JASON LENNARD AND ERIC GOLSON 11 No room for neutrality? The uncommitted European nations and the economic Cold War in the 1950s NIKLAS JENSEN-ERIKSEN 12 Concluding neutrality and war: bicycles in the rush hour TOSHIAKI TAMAKI AND JARI OJALA

Jari Eloranta is Professor of Economic History at the University of Helsinki, Finland.

is a Senior Teaching Fellow in the School of Economics at the University of Surrey, UK, and also teaches at the School of Oriental and African Studies (SOAS), London, UK.

is Associate Professor of Economic History at Uppsala University, Sweden.

is an Assistant Professor of Economics at the University of Minho, Portugal.

Small and Medium Powers in Global History: Trade, Conflicts, and Neutrality from the 18th to the 20th Centuries