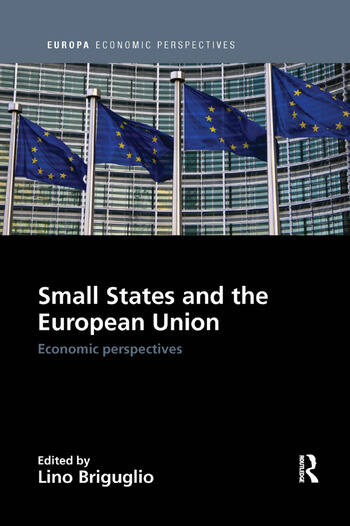 The Economies of European Union Small Member and Candidate States deals with the small states and candidate states of the EU, with a focus on their economic structure and performance, and the impact of EU membership (past, actual and potential) on the economy. The small states to be covered are those with a population of 3 million or less, namely: Cyprus, Estonia, Iceland, Latvia, Lithuania, Luxembourg, Malta, Macedonia, Montenegro  and Slovenia.

This title adds to the literature on the EU, on regional integration generally and on small states. It delves into the special constraints of small economic size, and examines why and how the small states of Europe manage to compete, albeit not without difficulty, with the larger states in the block, where free trade prevails.

The book is aimed primarily for students of EU affairs and of regional integration in general. It will also be useful for students of subjects relating to small states. It may also appeal to policy makers of small states, and to officials of international and regional organisations that have a constituency that includes small states.

The Editor and Contributors

possesses a PhD (Economics) from the University of Exeter, United Kingdom. Professor Briguglio is the Director of the Islands and Small States Institute of the University of Malta. He is known internationally for his seminal work on the `Vulnerability Index’, which led to a worldwide interest and to many quantitative studies on economic vulnerability. He has also pioneered work on the measurement of economic resilience. He has acted as consultant, mainly on matters related to small states, to various international organizations, including the Commonwealth Secretariat, the United Nations Environment Programme (UNEP), the United Nations conference on Trade and Development (UNCTAD), and the World Bank.

possesses a PhD (Economics) from the University of Liège, Belgium. He served as research fellow at the CEPS/Instead (now LISER) between 1985 and 1991 and as Conseiller de gouvernement at the Ministry of Economics in Luxembourg between 1991 and 2003. Since April 2003 he has held the position of Director-General of the Institute of Statistics and Economic Studies (STATEC), Luxembourg. Dr Allegrezza also acts as head of the Competitiveness Observatory at the Ministry of Economy and Foreign Trade, Luxembourg. He is head of delegation at the Economic Policy Committee of the EU.

is a Professor at the University of Akureyri, School of Business and Science, Iceland. He teaches courses on international business and macroeconomics. Professor Hilmarsson possesses a PhD in Public Administration and Economic Development from the American University in Washington, DC. He served as a Specialist and Co-ordinator with the World Bank Group in Washington, DC from 1990 to 1995, at the World Bank office in Riga from 1999 to 2003 and at the World Bank office in Hanoi from 2003 to 2006. From 1995 to 1999 he served as a Special Adviser to the Minister for Foreign Affairs in Iceland. Professor Hilmarsson has published over 60 scholarly articles and book chapters. In 2014 he published a book titled Small States in a Global Economy: Crisis, Cooperation and Contributions.

is senior research fellow in the field of technology governance at the Ragnar Nurkse School of Innovation and Governance, Tallinn University of Technology, Estonia. He was for many years the founding head of the Innovation Policy Research Programme at the Praxis Centre for Policy Studies, Estonia’s leading policy think tank, as well as one of its board members. Previously he has worked for Archimedes Foundation (1999-2001) and for the Phare Public Development Programme in Estonia (1997–98). He has published more than 80 research and policy analysis papers, especially in the fields of enterprise, economics, research and innovation, and Information and Communication Technology (ICT) policies, often with a focus on small states.

is Professor at University of Donja Gorica, Montenegro and President of the Board of Directors of the Societe Generale Montenegro Bank. Previously, he served as Minister of Finance (2010-12). During his career he was a member of the Administrative Council of the Development Bank of the Council of Europe (2006-08), Governor at World Bank and the European Bank for Reconstruction and Development (2010-12). Dr Katnic was involved in the design and implementation of numerous important projects related to public finance, economic development and structural reforms. He is member of the Mont Pelerin Society.

possesses a doctorate in Economics. He is Vice-Dean for Masters Studies at the Faculty of Economics of Vilnius University, Lithuania, He is also Head of the Department of Economic Policy at the same University. Professor Miskinis is currently President of the Lithuanian Economic Association and Editor-in-chief of journal Ekonomika published by Vilnius University. His main areas of expertise are international trade, foreign direct investments and competitiveness of nations.

is a full-time Professor and a Jean Monnet Chair holder at the Faculty of Economics, University of Ljubljana, Slovenia. He has also been a regular visiting Professor at the Wirtschaftsuniversität in Vienna, Austria. Professor Mrak’s main research areas include international capital flows, national and European Union (EU) public finances, and EU accession. He is author, co-author and editor of numerous books and journal articles, and also serves as a member of editorial boards and/or reviewer for several international journals. Professor Mrak has had numerous consultancy assignments on public finance and EU accession issues for the government of Slovenia as well as for international organizations and governments of several countries in the region of South Eastern Europe.

is PhD candidate at Ragnar Nurkse School of Innovation and Governance, Tallinn University of Technology and a project manager, senior expert at the University of Latvia. Her main research interests are in innovation policy with a focus on science-industry linkages, university technology transfer and as well as related government incentives in small countries. Her recent work is related to commercialization of publicly funded research and the impact that EU funds allocated for research and development have on technology transfer processes.

is an Associate Professor at the University American College Skopje, Macedonia. He also chairs the University Research Committee, which is in charge of steering research work. Dr Petreski specializes in research and teaching in applied macroeconomics. His narrow research focus is exchange-rate regimes and monetary policy and strategy, with particular reference to developing countries. For his research he was awarded the Young Scientist Award 2009 by the Macedonian Academy of Sciences and Arts, the Olga Radzyner Award 2010 by the Austrian National Bank and the Japanese Award for Outstanding Research on Development 2013 by the Government of Japan.

is an Associate Professor in the Department of Theoretical Economics at Vilnius University, Lithuania and is a deputy editor-in-chief of the magazine Ekonomika. She is an expert in the Centre for Quality Assessment in Higher Education (SKVC), Lithuania. Dr Rasteniene completed her PhD at Vilnius University. During 1997-2002 she worked as a senior economist at the Bank of Lithuania, Department of Monetary Policy. Her fields of interest also include emigration and sustainable development.

is adviser to Deputy Prime Minister for Economic Policy and Financial System, Montenegro. She is national co-ordinator for the Economic Reform Programme of Montenegro and has also co-ordinated strategically important documents including the National Development Plan of Montenegro, preparation of public-private partnerships (PPP) law and structural reform plans. During the period 2011-13 she served as Deputy Minister of Finance for economic policy and development. Her background in academic expertise is institutional economy, specifically pension system reforms. She is the member of the Gender Diversity and Governance Network in the Mediterranean and UNECE (United Nations Economic commission for Europe) PPP Team of Specialists.

obtained his MA and PhD degrees in Economics from Pennsylvania State University, USA in 1985 and 1988, respectively. He served as Economic Adviser to the President of the Republic of Cyprus from 1990-93. He is currently Professor of Political Economy, President of the Center for European and International Affairs and Head of the Department of European Studies and International Relations, University of Nicosia, Cyprus. As a Visiting Professor, Senior Fellow and/or Guest Speaker, he has visited several universities and think-tanks, including the London School of Economics and Political Science, the Brookings Institution, the Woodrow Wilson International Centre of Scholars, the Australian Institute of International Affairs, the Centre for European Integration Studies (University of Bonn) and the Hebrew University of Jerusalem. Professor Theophanous has published several books and numerous articles on the Cyprus problem and its economic aspects, Cyprus-European Union relations including the current economic crisis, issues of governance in bi-ethnic and multi-ethnic societies, European integration, political economy and European Union-Turkish relations.

is a Manager of Payment Systems Department at the National Bank of Macedonia. His previous work experience was closely related to monetary policy implementation and foreign reserve management as he has been a Head of the Open Market Operations Division and Deputy Manger of the Financial Market Operations Department. He is also Associate Professor of Economics at the School of Business Economics and Management - University American College Skopje, Macedonia. His teaching area covers monetary economics, and international and corporate finance, while his research focus includes monetary, trade and financial integration processes. He has been engaged in several research projects and was given the Dr Dragoslav Avramovic award by the National Bank of Serbia for the best research paper in macroeconomics and finance in 2012.