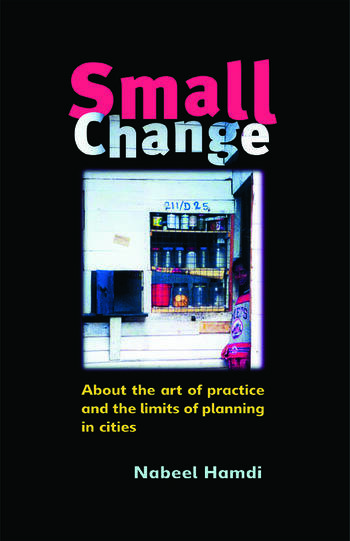 Small Change: About the Art of Practice and the Limits of Planning in Cities

What exactly is 'small change'? Build a bus stop in an urban slum and a vibrant community sprouts and grows around it - that is the power of small changes that have huge positive effects. This book is an argument for the wisdom of the street, the ingenuity of the improvisers and the long-term, large-scale effectiveness of immediate, small-scale actions. Written by Nabeel Hamdi, the guru of urban participatory development and the master of the art, Small Change brings over three decades of experience and knowledge to bear on the question 'what is practice'?. Through an easy-to-read narrative style, and using examples from the North and South, the author sheds light on this question and the issues that stem from it - issues relating to political context, the lessons of the 'informal city', and the pursuit of learning that challenges convention. The result is a comprehensive, yet imaginative, guide to the forms of knowledge, competencies and ways of thinking that are fundamental to skilful practice in urban development. This is powerful, informed, critical and inspiring reading for practitioners in the field, students and teachers of urban development, those who manage international aid and everyone looking to build their community.

Introduction: Design, Emergence and Somewhere In-between * Part I: The Setting * Street Work and Dev-talk: Who Controls the Truth? * Part II: Encounters in Practice * Departures and Arrivals * The Composting Bin: Looking for Starters * Power Points, Bullet Points and Waste Collectors: Learning from Precedent * Needs and Rights: Some Formal Planning * In Search of Community and the Structure of Place * The Bus Stop: Cultivating Community * Pickers, Sorters and Tap Attendants * The Pickle Jars * Part III: Learning Practice * Plan-Analyse-Survey: Planning From Back to Front * Governance and Networks: Organizing from Inside Out * Rigour and Relevance: It Can be Both * Playing Games - Serious Games * Index

Born in Afghanistan, and of Iraqi parentage, Nabeel Hamdi qualified as an architect at the Architectural Association in London in 1968. He worked for the Greater London Council between 1969 and 1978, where his award-winning housing projects established his reputation in participatory design and planning. From 1981 to 1990 he was Associate Professor of Housing at the Massachusetts Institute of Technology (MIT), where he was later awarded a Ford International Career Development Professorship. In 1997 Nabeel won the UN-Habitat Scroll of Honour for his work on Community Action Planning, and the Masters course in Development Practice that he founded at Oxford Brookes University in 1992 was awarded the Queen?s Anniversary Prize for Higher and Further Education in 2001. He is currently Professor of Housing and Urban Development at Oxford Brookes University. Nabeel has consulted on participatory action planning and the upgrading of slums in cities to all the major international development agencies, and to charities and NGOs worldwide. He is the author of Housing without Houses (IT Publications, 1995), co-author of Making Micro Plans (IT Publications, 1988) and Action Planning for Cities (John Wiley and Sons, 1997) and editor of the collected volume Educating for Real (IT Publications 1996).

Small Change: About the Art of Practice and the Limits of Planning in Cities