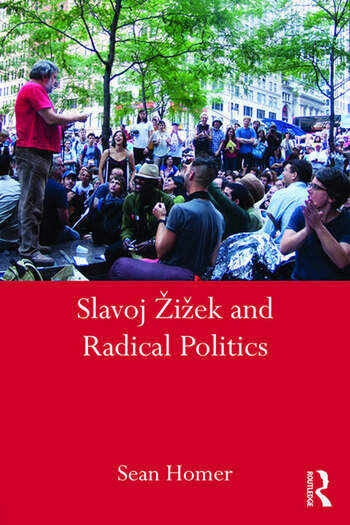 In this book, Sean Homer addresses Slavoj Žižek’s work in a specific political conjuncture, his political interventions in the Balkans. The charge of inconsistency and contradiction is frequently levelled at Žižek’s politics, a charge he openly embraces in the name of "pragmatism." Homer argues that his interventions in the Balkans expose the dangers of this pragmatism for the renewal of the Leftist politics that he calls for. The book assesses Žižek’s political interventions in so far as they advance his self-proclaimed "ruthlessly radical" aims about changing the world. Homer argues the Balkans can be seen as Žižek’s symptom, that element which does not fit into the system, but speaks its truth and reveals what the system cannot acknowledge about itself.

In Part II Homer explores Žižek’s radicalism through his critique of Alain Badiou, arguing that Badiou’s "affirmationism" provides a firmer grounding for the renewal of the left than Žižek’s negative gesture analyzed in Part I. What distinguishes Žižek from the majority of the contemporary Left today is his valorization of violence; Homer tackles this issue head-on in relation to political violence in Greece. Finally, Homer defends the utopian impulse on the radical left against its Lacanian critics.

Part I: Žižek in the Balkans

Introduction: The Case of Kosovo

3. To Begin at the Beginning Again: Žižek in the Former Yugoslavia.

Introduction: Thinking Through Žižek and Beyond

4. The Politics of Comradeship: Philosophical Construction and Commitment in Alain Badiou and Slavoj Žižek.

5. On "The Critique of Violence" and Revolutionary Suicide.

Conclusion: Resources of Hope: A Critique of Lacanian Anti-Utopianism.

Sean Homer is Professor of Film and Literature at the American University in Bulgaria.

'Critical framing of Žižek’s work in his Balkan and Yugoslav context, as his repressed "maternal space," in order to test overall validity of his so-called radical political praxis is what distinguishes Homer’s book from all other books on Žižek.' - Dušan I. Bjelic author of Normalizing the Balkans. Geopolitics of Psychoanalysis and Psychiatry (2011)

'Sean Homer shows the political value of a strict and profoundly antagonistic reading of Slavoj Žižek’s work, a reading that does not shy from a necessary degree of interpretative violence to open up fissures in a body of work that pretends to be a system. With the context as the Balkans and crucial conceptual leverage provided by Alain Badiou, this radical scholarly book elaborates a distinctive argument in which violence is pitted against violence. Here we have a body of work as symptom laid bare, and through the course of the reading the reader can come to see more clearly how that symptom consists of a series of contradictions, speaks of a problem that it is not yet conscious of. Homer makes this symptom speak.' - Ian Parker, Psychoanalyst, Manchester, Professor of Management, University of Leicester, UK.