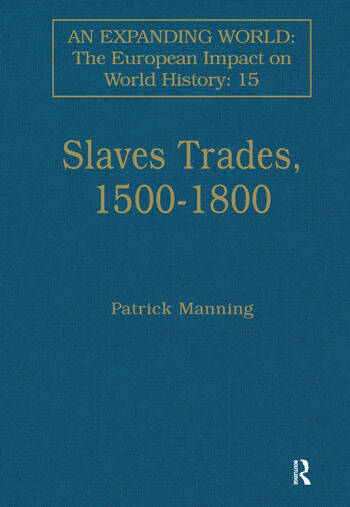 The trade in slaves is perhaps the most notorious feature of the era of European expansion. Though begun in ancient times, and continued well after 1800, in the early modern period there developed a particular nexus in which it boomed. This volume distinguishes between procurement and trade, and the exploitation of settled slaves (the subject of a separate volume in the series, edited by Judy Bieber), and underscores the importance of the slave trade as a factor in world history. A rank redistribution of wealth and power, it permitted the exploitation and reconstruction of much of the globe. The articles address issues of the volume and flow of trade, the various populations enslaved, factors of sex, age, and ethnicity, and its impact on economic change, as in the monetization of Africa or economic growth in England.

'the volume presents the African slave trade and its ramifications from a remarkably rich kaleidoscope of perspectives...a well-conceived, rich and inspiring selection of recent writings on the history of the African slave trade...a very useful research and teaching tool.' The Northern Mariner, Vol. VIII, No. 4 'European and Non-European Societies and Christianity and Missions along with the other volumes in An Expanding World should become a standard collection for any academic library. The invaluable bibliography, the variety of themes, and the historical problems will engage students of all levels, undergraduate, graduate, and postdoctoral, in many aspects of early modern and world history for years to come.' Sixteenth Century Journal, Vol. XXX, No. 1