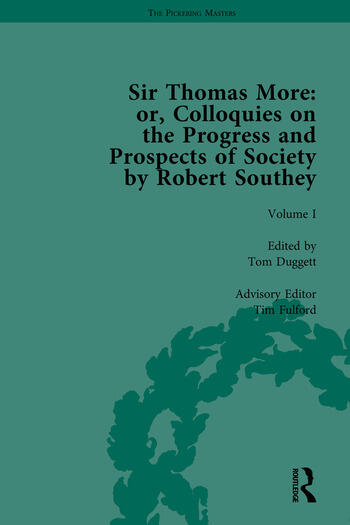 Sir Thomas More: or, Colloquies on the Progress and Prospects of Society, by Robert Southey

In 1829 Robert Southey published a book of his imaginary conversations with the original Utopian: Sir Thomas More; or Colloquies on the Progress and Prospects of Society. The product of almost two decades of social and political engagement, Colloquies is Southey’s most important late prose work, and a key text of late 'Lake School' Romanticism. It is Southey’s own Espriella’s Letters (1807) reimagined as a dialogue of tory and radical selves; Coleridge’s Church and State (1830) cast in historical dramatic form. Over a series of wide-ranging conversations between the Ghost of More and his own Spanish alter-ego, ‘Montesinos’, Southey develops a richly detailed panorama of British history since the 1530s – from the Reformation to Catholic Emancipation. Exploring issues of religious toleration, urban poverty, and constitutional reform, and mixing the genres of dialogue, commonplace book, and picturesque guide, the Colloquies became a source of challenge and inspiration for important Victorian writers including Macaulay, Ruskin, Pugin and Carlyle.

Note on the text and editorial procedures

Sir Thomas More; or, Colloquies on the Progress and Prospects of Society (1829)

II. The Improvement Of The World

III. The Druidical Stones.—Visitations Of Pestilence

Appendix A: Reviews of

Appendix B: A note on ‘Montesinos’, Southey’s name in

Colloquies (edited from the Sale Catalogue of his library)

Sir Thomas More: or, Colloquies on the Progress and Prospects of Society, by Robert Southey